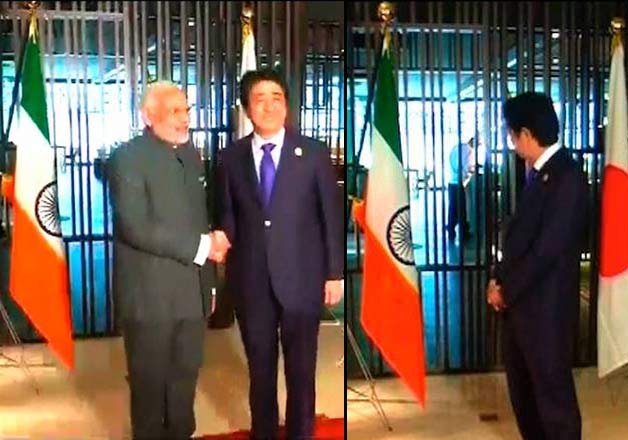 KUALA LUMPUR (92 News) – In another embarrassment for Indian prime minister Narendra Modi, the Indian tricolor was seen hoisted upside down during Prime Minister Narendra Modi’s photo op with Japanese counterpart Shinzo Abe before bilateral talks on the sidelines of the ASEAN Summit. The national flag was in the background of Modi and Abe’s customary handshake at the Summit and was hoisted on a stand next to that of Japan. The flag is seen with the green at top and saffron down as the two leaders met for the second bilateral on the sidelines of 13th ASEAN-India Summit in Kuala Lumpur. “It was an inadvertent mistake in the rush of things. It was unfortunate,” official sources requesting anonymity told PTI. Modi arrived in Kuala Lumpur on a three-day visit to Malaysia during which he will attend two high-profile meetings at the ASEAN-India and East Asia Summits besides addressing the Indian diaspora on Sunday.