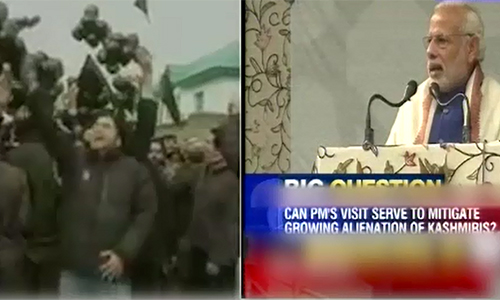 SRINAGAR (92 News) – Indian Prime Minister Narendra Modi arrived in Occupied Kashmir to inaugurate the controversial Baglihar Dam, while Kashmiris welcomed him with black balloons and flags. To win sympathies of the Kashmiris, Modi shed crocodile tears and said that the Kashmiris have suffered too much cruelties. On the other hand, the Indian forces arrested over 1,200 Hurriyat leaders and workers in a crackdown. The entire Hurriyat leadership has been placed under house arrest. Occupied Kashmir MLA Engineer Rasheed said that the Indian government should keep in mind that Kashamiris cannot be purchased.