The troops killed the youth identified as Altaf Kachroo and Omar Rasheed during a cordon and search operation at Munward area of the district. The troops also blasted a house in the area.

The authorities blocked mobile internet service in the district. The train service between Srinagar and Banihal has also been suspended.

The killing led to clashes between protesters and the Indian troops in the area. Youth took to streets soon after the troops launched the cordon and search operation in the village located near Khanabal area of the district. The troops fired teargas shells to disperse the protesters who pelted them with stones.

On the other hand, several barracks of Indian soldiers were completely gutted and a large quantity of arms and other items, including oil drums, were damaged in a massive fire which broke out in the Indian army’s 45 Rashtriya Rifles headquarters in Machil area of Kupwara district, yesterday.

Shutdown to be observed in IOK 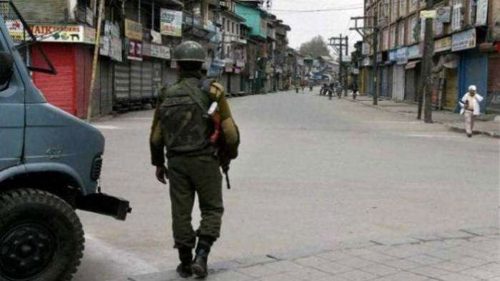 In IHK, a complete shutdown will be observed across the occupied territory on Thursday to register protest against the Indian government’s attempts to abrogate the Article 35-A of the Indian constitution.

Call for the strike has been given by the Joint Resistance Leadership comprising Syed Ali Gilani, Mirwaiz Umar Farooq and Muhammad Yasin Malik.

Meanwhile, the Chairman All Parties Hurriyet Conference Syed Ali Gilani has expressed deep concern over the plight of Kashmiri prisoners in all jails, in and outside Jammu and Kashmir.

In a statement issued in Srinagar, he said their only sin is that they demand their birth right of self-determination.