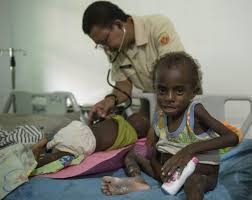 JAKARTA (AFP) - A deadly measles-and-malnutrition outbreak that killed scores of children in Indonesia's remote Papua province is over, authorities said.

Official figures showed a total of 72 children died while hundreds more were sickened as a result of the "extraordinary" outbreak, which hit several isolated communities in Papua's Asmat district between September 2017 and February 4, local officials said.

No new measles cases had been identified following the deployment of military and medical teams to the region last month.

"The extraordinary status of the measles event has been revoked and is over," Asmat district chief Elisa Kambu said in a letter dated Monday.

No figures were given for the number of children sickened but earlier official figures said the number topped 800.

The statement marks a de-escalation of a health crisis first made public in mid-January that highlighted a severe lack of medical care and other basic services in a far-flung island region.

Earlier reports suggested more than two dozen other children and adults had died in a remote community, but their deaths came earlier than the outbreak's official date range.

Papua has been the site of a low level insurgency against Jakarta's rule for decades and it remains the most impoverished region in the sprawling Southeast Asian archipelago.

Harrowing footage of rail-thin children with exposed ribs at under-equipped hospitals fuelled criticism that wealth from the region’s abundant natural resources is not being evenly shared with the ethnic Papuan population.

President Joko Widodo ordered military and medical teams to several locations across the vast region to treat the sick and undertake a mass immunisation campaign.

But the head of the military medical teams acknowledged to AFP that Jakarta's response was slow.

Observers blamed the crisis on a complex mix of government inaction, lack of jobs, logistical hurdles in reaching remote communities and resettlement efforts that pose a serious threat to many Papuans' traditional hunting-based lifestyles.