ISLAMABAD (92 News) – Intermittent rain with snowfall over the hills continued in Upper Punjab, Khyber Pakhtunkhwa, Gilgit-Baltistan and Kashmir on Tuesday.

The ongoing spell of rain and snowfall continues as different parts of the country have been receiving intermittent rain since Monday. The fresh wet spell is likely to continue till Thursday.

A Met Office spokesman said that the current rain spell will persist for another two days. The temperature of various area of the country dropped because of snowfall.

The rain which lashed parts of the country including Lahore, Murree, Islamabad, Rawalpindi, Peshawar, Bahawalpur, Multan, Faisalabad, Gujranwala and others areas continued on Tuesday.

Snow and rain also continued in Murree, the mountains of Azad Kashmir and Diamer, while rain was also recorded in Chilas. 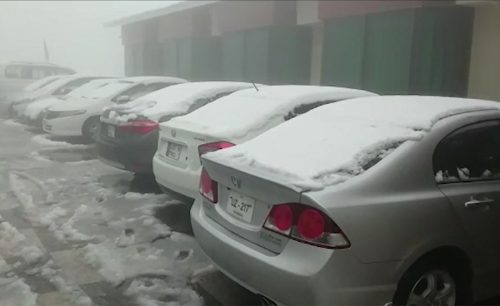