Owing to snowfall, people were restricted to their homes. Snow created difficulties for local residents, especially those residing in rural areas.Thousands of vehicles were stranded on several roads after snowfall in the city, creating problems for the tourists.

All roads leading to the snow-covered resort were blocked.People, especially women and children, are facing hardships in the biting cold as their vehicles remained stuck for hours.Snow-covered mountains are giving a beautiful look. People enjoyed snowfall on the Mall Road and Kashmir Point.

Meanwhile, Kalam, Malam Jabba and Shangla also received the snowfall. People are facing difficulties due to blockage of roads. 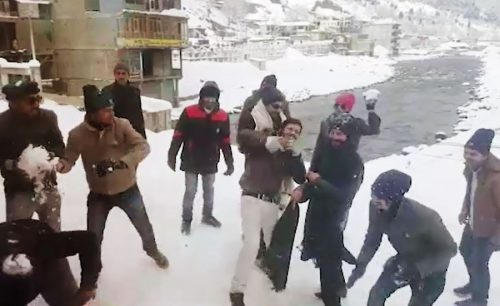 A tourist said that he was overwhelmed to experience the spell of snow. “I had never got this opportunity,” he said. “It is a blessing to have not only diversity in language and communities in our country, but to also have natural beauty in different regions.”

On the other hand, snowfall continues in mountainous areas of south Waziristan.Skardu received 3-5 inches snowfall, creating problems for the people. Moreover, thick clouds hovered over Peshawar.

Mainly cold and dry weather is expected in most parts of the country. However, light rain with light snowfall over the hills is expected at isolated places in Malakand, Hazara divisions, Kashmir and Gilgit-Baltistan.