LAHORE (92 News) – International Labour Day is being observed on Wednesday (today) with the renewed pledge to acknowledge and promote the dignity of labourers.

The theme of this year Labour Day is “Uniting Workers for Social and Economic Advancement”. International Labour Day observed in the memory of massacre of labourers who laid their lives in 1886 in Chicago while protecting the rights of labourers.

Today is a gazetted holiday, labour and traders organizations have chalked out special programmes to highlight the significance of the day. Pakistan’s first labor policy was devised in 1972, in which May 1 was declared an official holiday. 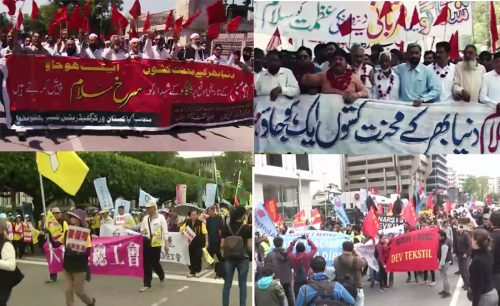 The day was first proposed in the late 19th century by trade unionists as the labor movement gained significance. In 1894 the United States Congress unanimously voted to approve legislation to make Labor Day a national holiday which was signed by President Grover Cleveland. It is celebrated in more than 80 countries around the world.

However, the government and private organisations, educational institutions and markets remained closed to observe Labour Day.

Different political and labour organizations‚ particularly the labour wings of political parties and professional bodies organised programmes to highlight significance of the day and rights of the workers.

Rallies are being taken out across the country to mark the International Labor Day with the renewed pledge to acknowledge and promote the dignity of laborers.

Labor wings of various political parties and labor organizations will take out rallies to highlight the significance of the day. The Day is marked by different rallies and seminars to highlight the fundamental and basic rights of workers.