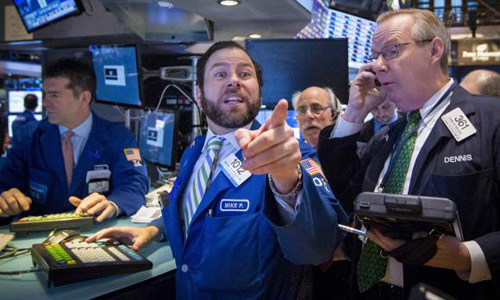 NEW YORK - Investors enjoying near-record levels for major stock indexes will scrutinize housing data and other economic indicators in the coming week for hints about the timing of U.S. interest rate hikes to see if the rally will continue. Concern about the Federal Reserve's path of rate increases and the soaring U.S. dollar have resulted in big swings in the S&P 500 on a daily basis, even though overall expectations for volatility remain low. Bolstered by reduced expectations of approaching rate hikes, the S&P 500 .SPX and Nasdaq Composite .IXIC came close to record closing highs on Friday. "Any piece of economic data that speaks to the pace of job creation or inflation will be watched very closely. That's the driver," said Art Hogan, chief market strategist at Wunderlich Securities in New York. That makes economic updates due in the next few days all the more important, strategists say, including February new home sales on Tuesday and February durable goods orders on Wednesday. With Wall Street bracing for the first Fed rate hike since 2006, the S&P 500 on average this year has fluctuated 24 points per session, its most volatile since December 2011, according to Thomson Reuters data. After U.S. consumer prices in January fell their furthest in six years due to low gasoline prices, Tuesday's February Consumer Price Index is expected to be up 0.2 percent, according to a Reuters poll USCPI=ECI. The U.S. economy's growth prospects and the outlook for rate hikes have also been clouded by the strong dollar. The greenback's 20 percent surge over a year has caused about 50 companies to reduce earnings expectations for the first quarter, and more could be on the way. On Friday, the dollar .DXY was off 1.5 percent against a basket of major currencies and registered its biggest weekly decline since 2011. Expectations for first-quarter earnings are already off to a poor start. For every company that has pre-announced earnings above Wall Street’s expectations, 5.5 others have pre-announced below expectations, according to Thomson Reuters data. That's the worst ratio since the same point of time in the first quarter of 2014, when the ratio was 7.2 to 1. Investors also worry about falling oil prices LCOc1 CLc1 and how much of the recent drop is attributable to global economic weakness as opposed to oversupply. Energy companies account for 8 percent of the earnings of S&P 500 companies but volatile crude prices reverberate across the economy. Some investors worry that consumers are not spending money freed up by lower gasoline prices on more goods and services. "They’re saving it or paying down debt,” said Bucky Hellwig, senior vice president at BB&T Wealth Management in Birmingham, Alabama. "That’s why everyone is nervous." - REUTERS