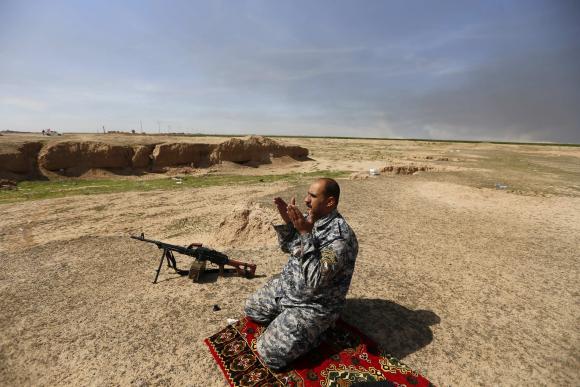 BAGHDAD - Islamic State fighters traded sniper fire and mortar rounds with Iraqi troops and allied Shi'ite militia forces on Sunday in the city of Tikrit but no major advances were made by either side, a military official who returned from the front said. The nearly two-week-old operation to win back the city from the radical Islamist militants occupying large parts of the country's north and west been stalled since Friday, when security officials said Iraqi forces and their militia allies would wait for reinforcements before moving forward. Two days later, back-up had not yet arrived, and officials continued to stress the challenges they faced in flushing out militants in street-by-street battles and defusing bombs and booby traps they laid while retreating from parts of the city. "There were no new pushes today from either side, only scattered skirmishes in the northern and southern parts of the city," Colonel Mohammed Abid al-Jubouri told Reuters by phone after visiting the southern edge of Tikrit on Sunday. Jubouri said the process of "organizing troops and waiting for reinforcements" was ongoing and did not say when a fresh effort to seize the central districts of the city still held by IS would begin. The extremists still hold about half the city, which lies about 160 km (100 miles) north of Baghdad. The effort to retake Saddam Hussein's home city from the militants who overran it last year has been the biggest offensive yet against the group that has declared an Islamic caliphate on territory it controls in Iraq and neighboring Syria. - Reuters