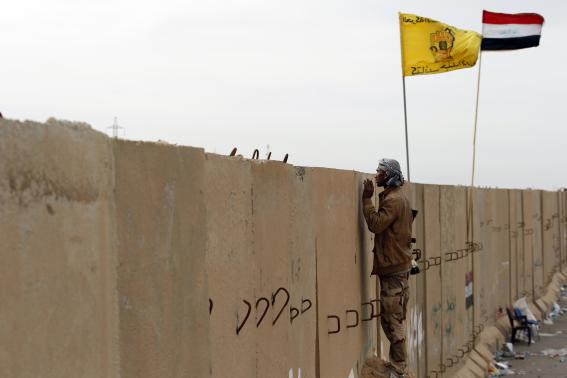 BAGHDAD (Reuters) - The offensive to retake Tikrit appeared to stall on Friday, two days after Iraqi security forces and mainly Shi'ite militia pushed into Saddam Hussein's home city in their biggest offensive yet against the militants. A source in the Salahuddin Operations Command said Iraqi forces would not move forward until reinforcements reached Tikrit, of which Islamic State still holds around half. Using guerrilla warfare tactics, the militants have turned the city into a labyrinth of home-made bombs and booby-trapped buildings, and are using snipers to halt their progress. Hadi al-Amiri, the head of the Shi'ite paramilitary Badr Organization and now one of the most powerful men in Iraq said the outcome of the battle for Tikrit was in no doubt, but Iraqi forces needed time. "We are not in a hurry, but we have a plan and we are following it," Amiri told Iraqi state television from the Tikrit frontline. "Even if the battle drags on for two, three or four days that is okay. We will celebrate the liberation of Tikrit from the enemy.” A victory in Tikrit would give Iraqi forces momentum for the next stage of the campaign to retake Mosul, the largest city under control of Islamic State, which now rules a self-proclaimed caliphate in Sunni regions in Syria and Iraq. But the involvement of Iran, which backs some of the Shi'ite militia at the forefront of the campaign and is also playing a direct role, is a source of unease for some Sunnis in Iraq and across the wider region. Islamic State fighters overran Tikrit last June during a lightning offensive that was halted just outside Baghdad. They have since used the complex of palaces built in Tikrit under Saddam, the executed former president, as their headquarters. MARCHING TO MOSUL The insurgents were still in control of the presidential complex and at least three other districts in the center of Tikrit on Friday. Iraqi special forces attacked a medical college in southern Tikrit at dawn, but the militants managed to fend them off, killing three soldiers. A further six people were killed when a Humvee vehicle packed with explosives rammed into an outpost of the Iraqi forces and to the west of the city. More than 20,000 Iraqi troops and Shi'ite militias, supported by local Sunni tribes are taking part in the offensive, which began 11 days ago, advancing from the east and along the banks of the Tigris. Any assault on Mosul is likely to be a far more complex undertaking. The northern city is larger, further away from core government-held territory and still densely populated, unlike Tikrit, most of whose residents fled long before the operation began. The foreign minister of Sunni kingdom Saudi Arabia, Saud al-Faisal, last week said the battle for Tikrit showed how Iran was "taking over" Iraq. Iranian Revolutionary Guard Commander Qassem Soleimani has been spotted on the battlefield overseeing the Tikrit offensive, in which Shi'ite militia are a prominent actor, since the regular army folded last June. The Shi'ite militia are accused of committing abuses against Sunnis in other territory they have retaken from Islamic State -- charges they deny. OFFENSIVE AROUND KIRKUK Islamic State spokesman Abu Mohammad al-Adnani said in an audi-recording published on Thursday that its fighters remained "steadfast" and were growing in strength, dismissing its enemies claims of gains in Tikrit as "fake". Adnani warned followers of the danger posed by Shi'ites, using a derogatory term to refer to them: "The rejectionists have entered a new phase in their war against the Sunni people: they have begun to think of taking and controlling the Sunni areas," he said. "They have come to take your homes and belongings, kill your men and rape and enslave your women." Even if the militants are routed from the city, they still hold a vast area straddling the Syrian border where they are likely to regroup, and Iraqi forces have previously struggled to hold ground they have retaken from the extremist group. Islamic State is on the back foot in the north, where Shi'ite militia and Kurdish forces known as peshmerga went on the offensive around the oil-rich city of Kirkuk on Friday. The peshmerga began attacking IS positions near Kirkuk on Monday and have since retaken territory and a number of villages to the southwest. Kurdish commanders said they had faced relatively weak resistance, but were being held up by homemade bombs the militants laid before retreating to their stronghold of Hawijah. Shi'ite militiamen, many of them from Iraq's ethnic Turkman minority, were closing on the village of Bashir south of Kirkuk, which Islamic State overran last June, massacring more than a dozen people.