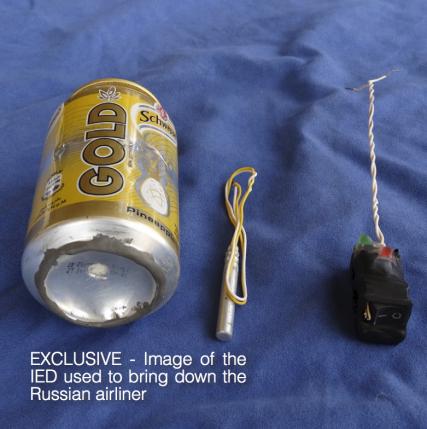 CAIRO - Islamic State's official magazine carried a photo of a Schweppes soft drink can it said was used to make an improvised bomb that brought down a Russian airliner over Egypt's Sinai Peninsula last month, killing all 224 people on board. The photo showed a can of Schweppes Gold soft drink and what appeared to be a detonator and switch on a blue background, three simple components that if genuine are likely to cause concern for airline safety officials worldwide. "The divided Crusaders of the East and West thought themselves safe in their jets as they cowardly bombarded the Muslims of the Caliphate," the English language Dabiq magazine said in reference to Russia and the West. "And so revenge was exacted upon those who felt safe in the cockpits." Western governments have said the Airbus A321 operated by Metrojet was likely brought down by a bomb and Moscow confirmed on Tuesday it had reached the same conclusion, but the Egyptian government said it has still not found evidence of criminal action. Explosives experts said it was feasible the device shown in the photo could bring down a plane, depending on where it was located and the density of explosives in the soft drink can. The most vulnerable locations include the fuel line, the cockpit or anywhere close to the fuselage skin. "The placement is the critical thing," said Jimmie Oxley, a professor of chemistry who specializes in explosives at the University of Rhode Island. Oxley and other experts drew parallels with the bombing of Pan Am Flight 103 by Libyan nationals over the Scottish town of Lockerbie in 1988. An investigation showed a palm-sized explosive in a cassette recorder in a bag in the luggage hold had ripped a 50 centimetre hole in the fuselage and decompression caused the plane to break up in mid-air. The apparent similarities, the detonator and switch suggested the soda can device was on a timer, rather than operated by a suicide bomber, suggested a similar chain of events on the Russian airliner, some experts said. However, Clive Williams, a professor at the Australian National University's Centre for Military and Security Law and a member of the International Association of Bomb Technicians and Investigators, said the use of a soda can raised questions about whether the device was included in the catering supply. Experts added that the photo could also provide a key clue in tracking Islamic State as the detonator pictured was a commercial one, which could be traced back to its manufacturer. "TERRORIST ACTIVITY" State Department spokesman John Kirby said on Wednesday the US government was not in a position to confirm "the veracity" of the magazine's claim. "We do believe that terrorist activity is likely the reason," he said, referring to the crash. Islamic State also published a photo of what it said were passports belonging to dead Russians "obtained by the mujahideen". It was not immediately possible to verify the authenticity of the published photos. The group, which has seized large swathes of Syria and Iraq, said it had exploited a loophole at Sharm al-Sheikh airport, where the plane originated, in order to smuggle a bomb on board. The airport is widely used by budget and charter airlines to fly tourists to the nearby resorts on the Sinai coast. Islamic State said it had initially planned to bring down a plane belonging to a country participating in the U.S.-led coalition bombing it in Syria and Iraq, but it changed course after Moscow started its own air strikes campaign in Syria. "A bomb was smuggled onto the airplane, leading to the deaths of 219 Russians and five other crusaders only a month after Russia's thoughtless decision," it said. Egypt's interior minister told a news conference in Sharm al-Sheikh on Tuesday that there was "no information" about security lapses at the airport. Islamic State's Egyptian branch, Sinai Province, claimed responsibility for the attack the day it happened but Egyptian officials were quick to dismiss talk of a bomb as premature. NO SAFETY IN MUSLIM LANDS Egypt is battling an Islamist insurgency in the Sinai, a strategic peninsula bordering Israel, Gaza and the Suez Canal. But Islamic State said the airline attack was primarily planned as a response to Russian and Western air strikes. "This was to show the Russians and whoever allies with them that they will have no safety in the lands and airspace of the Muslims," the group wrote. Russia, an ally of Syrian President Bashar al-Assad, launched air strikes against opposition groups in Syria including Islamic State, on Sept. 30. The downed aircraft had been carrying Russian holidaymakers from the Egyptian resort to St Petersburg when it broke up over Sinai. On Tuesday, Russian President Vladimir Putin vowed to hunt down those responsible and offered a $50 million reward for information leading to the perpetrators. "We will find them anywhere on the planet and punish them," Putin said at a sombre Kremlin meeting. Alexander Bortnikov, the head of Russia's FSB security service, said traces of foreign-made explosive had been found on fragments of the downed plane and on passengers' personal belongings. He said the bomb probably contained around 1 kilogram (2.2 pounds) of TNT. -Reuters