Israel reaches out to France before resumption of Iran nuclear talks 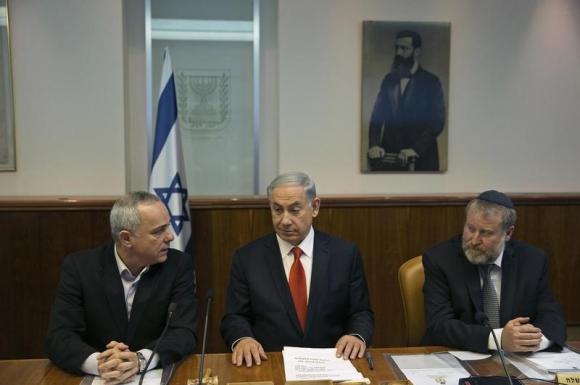 Israel reaches out to France before resumption of Iran nuclear talks

JERUSALEM/PARIS - Top Israeli envoys were sent to confer with French officials on Sunday about preventing what Israel considers an unfavorable nuclear deal with Iran after tensions surfaced between France and the United States ‎over negotiation strategy. Though France has demanded more stringent restrictions than other Western delegations during talks with Iran, one French diplomat played down Israel's sway in Paris, saying that Israeli Prime Minister Benjamin Netanyahu had overplayed his hand in a March 3 speech to the US Congress. France, the United States and four other world powers suspended negotiations with Iran in Switzerland on Friday and are to reconvene next week to try to break the deadlock over sensitive atomic research and lifting of sanctions before a March 31 deadline for a framework deal. Israel's Strategic Affairs Minister Yuval Steinitz, however, told Israel Radio that he is flying to Paris at short notice and may also hold meetings with other European nations to re-state his country's concerns. "This is an effort to prevent a (nuclear) deal that is bad and full of loopholes, or at least ... to succeed in closing or amending some of these loopholes," said Steinitz, who is being accompanied by Israeli National Security Adviser Joseph Cohen. Officials in Israel, which is not a party to the negotiations but feels especially threatened by the possibility of a nuclear-armed Iran, have long described France as the negotiating power with views closest to Israel's. Steinitz credited France with including curbs on Iran's mid-level enrichment of uranium to 20 percent fissile purity in the preliminary nuclear deal agreed in November 2013. “The French helped us a great deal," he said. FRAYED TIES At one point during the latest negotiations French Foreign Minister Laurent Fabius phoned his team to ensure that it made no more concessions, officials at the talks said last week. And on Saturday Fabius said France wants an agreement that would guarantee that Irancould not produce a nuclear weapon. Iran, meanwhile, says that its nuclear program is for peaceful needs only. Israel's ties to its main ally, the United States, have frayed over Netanyahu's lobbying against the prospective Iran deal. Many of US President Barack Obama's fellow Democrats boycotted Netanyahu's March 3 speech in Congress, which had been arranged by Republicans. One senior French diplomat said that Netanyahu's speech, in which he reiterated his demand for a total rollback of Iranian nuclear technologies, had diminished Israel's clout. Paris is also unhappy with long-stalled Israeli-Palestinian peacemaking. "Israel has marginalized itself. In November 2013 we were working with them and they played the game. They didn't take unrealistic positions," the diplomat told Reuters on condition of anonymity. "But here they have gone too far. We told them to play their part so they could influence a final accord, but they have taken unrealistic positions." US officials have privately bristled at France’s outspoken criticism of the negotiating process and its demands for more stringent restrictions on Iran. Officials have expressed concerns that France might block a deal at the United Nations. France's envoy to Washington, Gerard Araud, has been particularly vocal, tweeting that the setting of a March 31 deadline for a framework deal was "a bad tactic" and "counterproductive". The target date for a full agreement is June 30 and European Union foreign policy chief Federica Mogherini has played down the importance of the end-of-March deadline, saying that the priority is to seal a comprehensive deal by July.  - Reuters