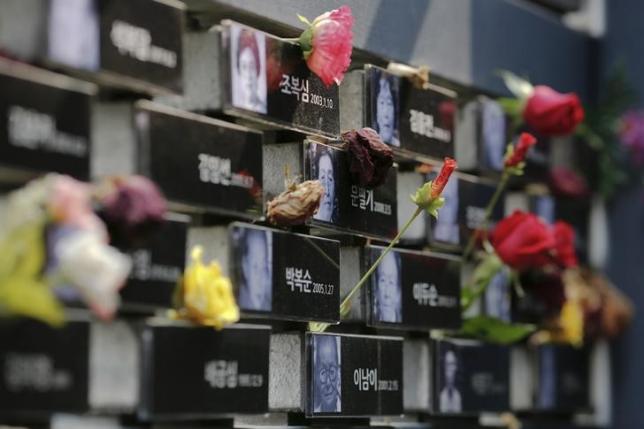 TOKYO/SEOUL - Japan's foreign minister will visit Seoul on Monday to meet his South Korean counterpart for talks aimed at an early resolution to a row over comfort women, as those forced to work in Japan's wartime military brothels are euphemistically known.

The dispute has long plagued ties between the East Asian neighbours, although relations have warmed since Abe met President Park Geun-hye last month. That meeting took place partly under pressure from the United States, which is keen to see its two allies get along.

"I'm ready to rack my brains, do my utmost and sweat," Kishida told reporters. "We have been trying to realise the agreement ... to accelerate talks and seek an early settlement. This is part of this effort."

Suga reiterated there was no change to Japan's stance that the matter of compensation was settled by a 1965 bilateral treaty.

However, the Nikkei business daily reported that Japan would propose creating a government-backed fund to help the former comfort women as part of a possible agreement.

Abe, like many conservative Japanese politicians, had in the past criticised a 1993 apology acknowledging the role of Japanese authorities in coercing the women. As prime minister, Abe has said he stands by the statement.

In 1995, Japan set up a fund that offered letters of apology signed by prime ministers and financial aid combining compensation from public donations and medical support from the government for individual women. It was wound up in 2007.

South Korea, which for a time appeared willing to put the issue to rest, has said those steps were not enough.

Tokyo wants assurances any resolution to the feud that might be reached will be final, Japanese government sources have said.

Helping to set the stage for Kishida's visit, a South Korean court last week cleared a Japanese journalist of defaming Park. On Wednesday, its Constitutional Court also refused to review a complaint over the 1965 treaty. -Reuters