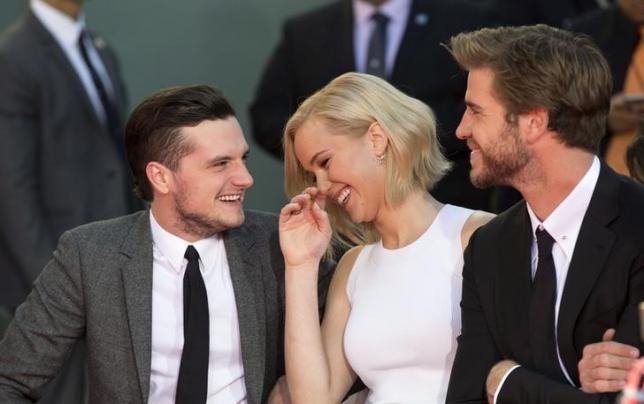 BERLIN - Actress Jennifer Lawrence said playing the reluctant warrior character Katniss Everdeen in the "Hunger Games" inspired her to speak out against the gender pay gap in the film industry. Lawrence, who criticized the disparity in pay between men and women actors in Hollywood films in an open letter this month, was asked at a news conference whether the Katniss character had motivated her to address the issue. "I don't see how I couldn't be inspired by this character, I mean I was so inspired by her when I read the books, it's the reason I wanted to play her," she said, a day before the world premiere of "The Hunger Games: Mockingjay - Part 2" in Berlin. "So I think it would be impossible to go four years with this character and not be inspired by her." Co-star Donald Sutherland, who plays the tyrannical President Snow whose government is the target of the revolution led by Katniss, said he hoped the hugely popular films would motivate young people worldwide to become political activists. "If it doesn't work, we're dead, all of us, if we don't evoke climate change, if we don't solve refugee problems, we don't do any of that, we're dead," Sutherland said, adding that a film could be a trigger for change. "I know that it can because 'Paths of Glory', Stanley Kubrick's film, politicized me in 1956," the Canadian actor said. "So this one is universal, it goes all over the world and young people love it." Lawrence, who has become one of the brightest stars in Hollywood largely on the basis of the "Hunger Games" films based on the novels by Suzanne Collins, said that for her the hardest aspect of playing Katniss was the fact that the character was a slow burn when it came to becoming a diehard revolutionary. "I wanted her to be a warrior right away, I wanted her to want to be a leader," Lawrence said. "I had to keep my own personal emotions about her situation out of my performance." -Reuters