JHAL MAGSI (92 News) – The funeral prayer of the police personnel who was martyred in yesterday’s suicide bombing at a sufi shrine in Jhal Magsi which left at least 20 people dead and 25 others wounded.

The martyred police personnel blocked the way of the suicide bomber who attempted to enter the shrine before blowing himself up.

Not a single government official attended the funeral prayer of martyred police personnel. 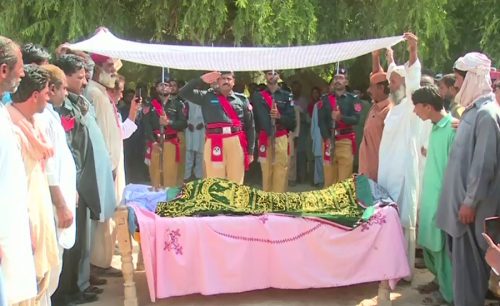 The bodies of other martyred people have been shifted to their native areas.

Earlier, a suicide bomber struck a shrine packed with worshippers in a remote village in southwestern Pakistan yesterday, killing at least 20 people and leaving at least 25 others wounded.

The bomber detonated his explosives vest when he was stopped for a routine search by a police officer guarding the shrine in the village of Jhal Masgi, about 400 kilometers (240 miles) east of Quetta, the capital of Balochistan province.

The Islamic State (IS) claimed the attack through its website. According to the shrine’s official website, it is of a Muslim saint who was born in 1852 A.D. and devoted his life for the wellbeing of people.

This is the third shrine attack in the country over the last the last one year. At least 135 people were killed and over 400 others injured in the previous two attacks, one in Balochistan and the other in neighboring Sindh Province.