John Lennon guitar sells for over $2.4 million at California auction 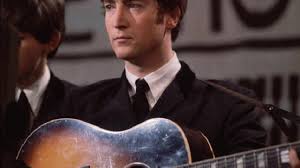 John Lennon guitar sells for over $2.4 million at California auction

LOS ANGELES - A guitar stolen from the late John Lennon in the 1960s sold for $2.41 million on Saturday at an auction in Beverly Hills, California, and a Beatles drum head went for $2.1 million, fetching some of the highest prices ever for items of rock and roll memorabilia. The 1962 J-160E Gibson acoustic guitar had for decades been in the possession of John McCaw, a novice musician who bought it in the late 1960s without knowing it had been stolen from the legendary Beatle several years before, said auctioneer Darren Julien. Half of the proceeds from the sale of the guitar, which was stolen from Lennon at a December 1963 Christmas concert, will go toward the Spirit Foundation, a charitable organization that he and his widow, Yoko Ono, created, Julien said. The instrument's authenticity was determined by its matching serial number and wood grain, among other things, Julien said. The buyer, who paid $2.41 million at a Julien's Auctions event, has asked to remain anonymous, Julien said. Though only in Lennon's possession for just over a year, the guitar had an illustrious history. Lennon bought it at a Liverpool music shop in 1962 and used it on recordings of a number of Beatles songs, including "P.S. I Love You" and "Love Me Do," according to Julien's Auctions. He also is said to have strummed it while writing several Beatles hits with Paul McCartney, such as "I Want To Hold Your Hand" and "All My Loving." "It's such an important part of Lennon's career and Beatles history," Julien said. "I knew it would go over $1 million; I had no idea it would go over $2 million." The price far surpasses the $965,000 paid at a 2013 Christie's auction for the electric guitar Bob Dylan played at the 1965 Newport Folk Festival, where he shocked folk traditionalists with a set of rock songs. According to Guinness World Records, a Fender Stratocaster guitar sold for a record $2.7 million at a 2005 charity event in Qatar. The instrument had been signed by the likes of Keith Richards, Eric Clapton and Paul McCartney. On Saturday, another big seller at the Julien's Auctions event was a Beatles drum head, which is the membrane stretched over a drum. The drum head, which was used by The Beatles when they made their historic appearances on "The Ed Sullivan Show" in 1964, sold for $2.1 million, Julien said. -Reuters