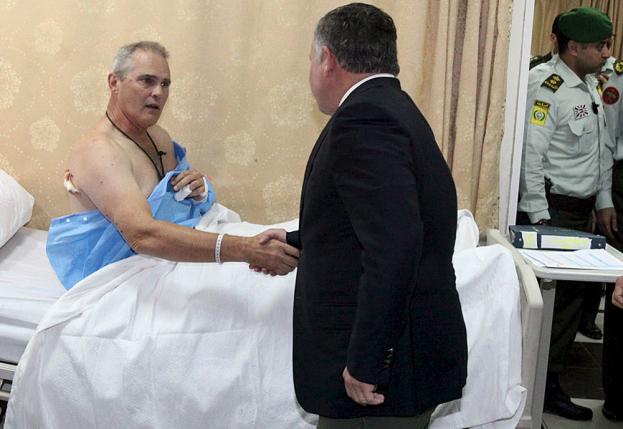 AMMAN - A Jordanian officer shot dead two US government security contractors, a South African trainer and two Jordanians at a US-funded police training facility near Amman on Monday before being killed in a shootout, Jordanian authorities said. US President Barack Obama said he was treating very seriously the attack at the King Abdullah Training Centre, in which three Jordanians and one Lebanese citizen were wounded, and a full investigation was under way. A senior Jordanian official told Reuters the gunman was a police captain, and authorities identified him as Anwar Abu Zeid. There was no immediate word on the motive for the attack. Jordan is a staunch US ally in the Washington-led campaign against Islamic State militants who hold large areas of neighbouring Syria and Iraq, a position Jordanian officials say leaves the kingdom vulnerable to jihadist attacks. "This incident sadly does not come as a surprise, as the threat of Islamist terrorism has only increased in the region in the last few years in the aftermath of Syria and Iraq. As much as pre-emptive measures have been taken, it is impossible to eradicate all risks," said a senior Jordanian official who requested anonymity, citing political sensitivities. The US Embassy in Amman said two American civilian security contractors and a South African contractor were shot to death, and one slain Jordanian was a translator. It was "premature to speculate on motive at this point" with the investigation proceeding, it said. A second Jordanian, who had been in critical condition, died later of his wounds, Jordan's government said. There were differing early reports on the number killed, with three US sources saying eight people died in the attack. Jordanian government spokesman Mohammad Momani denied that and Jordan's official death toll stands at six. A US official said the two Americans were working for the US State Department's International Narcotics and Law Enforcement Affairs Bureau training Palestinian security forces. The US security contractor DynCorp International confirmed its personnel were fired on during the shooting but did not elaborate. Obama told reporters at the White House: “The fact that someone dressed in military uniform carried out an attack at a training facility in (Jordan)... we take this very seriously, and we’ll be working closely with the Jordanians to determine exactly what happened." The shooting spree took place on the 10th anniversary of al Qaeda suicide bombings that targeted three Amman luxury hotels and killed 57 people, the deadliest militant attack in Jordanian history. SUSPECT'S RELATIVES EXPRESS SHOCK Security sources said several earlier militant plots to attack the King Abdullah training centre had been foiled. Momani, the government spokesman, said the attacker was shot dead by Jordanian security forces inside the training centre. He did not commit suicide as security sources had earlier reported. Relatives of the suspect gathered at his home in a village near the northern town of Jerash, expressing disbelief the 29- year-old father of two could have committed the attack. His uncle, Sulaiman Abu Zeid, said his nephew, who had served in the police force for 11 years, was a pious Muslim who did not harbour radical Islamist beliefs. "My nephew was not an extremist but he was pious and prayed every single prayer. If they consider this as extremism, then it's their business," his uncle told Reuters, adding the family would not take the body "until the truth was uncovered". A security source said the shooting spree took place in the canteen of the training facility. Leaked photos published online, purportedly of the shooting scene, showed blood splattered on the floor with smashed tables and glass. The training facility was set up on the outskirts of the capital, Amman, after the 2003 US invasion of Iraq to help rebuild the shattered country's postwar security forces and to train Palestinian Authority police officers. Jordan hosts several hundred US contractors who are part of a military programme to bolster the kingdom's defences, including the stationing of F-16 fighter jets that use Jordanian airfields to hit Islamic State positions in neighbouring Syria. But Jordan's role in the war against Islamic State has raised disquiet among some Jordanians about instability at their borders. They fear that Amman's enhanced role in the campaign might provoke Islamist bloodshed in their country. Jordanian authorities have since tightened security around sensitive government districts, increased surveillance of radical Islamists and jailed dozens on suspicion of plotting militant attacks on Israelis, Americans and other Westerners. King Abdullah believes that ultra-hardline jihadists pose an existential threat to the kingdom. Since the civil war erupted in Syria in 2011, hundreds of Jordanians have joined Sunni Muslim militant groups in the insurgency against President Bashar al-Assad, according to Islamists close to the subject. But Jordan's Western-aligned monarchy is torn by conflicting interests over Syria. It has tried to steer a middle course between that of Gulf Arab allies who want Assad ousted at almost any cost and its own concerns - echoed by Washington - that a radical Islamist victory in Syria would install a worse threat. That ambivalence means that while Jordan has hosted small-scale US training of rebels and allowed modest quantities of Gulf-supplied arms to filter into Syria, it has ensured that its border has not become an easy conduit for guns and combatants. -Reuters