Judges doing everything other than their work: Bilawal

In his tweet, PPP chairman Bilawal Bhutto Zardari said that the Law Reforms Commission under the supervision of Chief Justice of Pakistan (CJP) had already been formed with judges from all four provinces as members.

He further said that according to the Rules, the commission had to meet four times a year but they haven’t met since 2015.

The PPP chairman went on to say that while the judges continue to play politician and do all jobs but theirs – justice suffers in Pakistan. 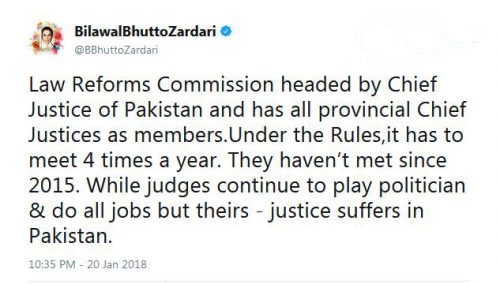