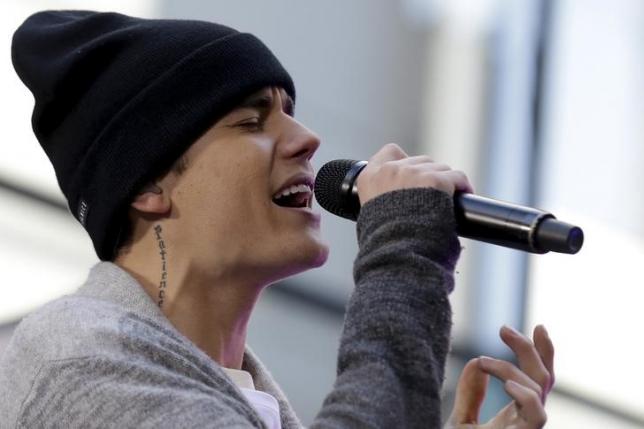 LONDON – Justin Bieber stormed the British singles charts on Friday with three singles from his new album in the top five, a feat no other artist has managed since John Lennon, posthumously, in 1981. The Canadian singer's singles "Sorry", "Love yourself" and "What do you mean" took first, third and fifth place. "Sorry" pushed Adele's "Hello" slipped to second place from the top spot it had occupied for three weeks. Lennon's "Imagine" was top, "Happy Xmas (War Is Over)" was third and "(Just Like) Starting Over" fifth in January 1981, the month after he was shot dead in New York. Bieber's songs all come from his album "Purpose" which sold 90,000 copies this week. Every track from it charted inside the top 100 singles. But it was narrowly beaten to top position in the album chart by four-piece boy band One Direction's "Made in the A.M." which is now the fastest-selling album of 2015. Notching up over 93,000 sales, this is the group's fourth UK No. 1 having previously scored the top place in 2012 with "Take Me Home," in 2013 with "Midnight Memories" and in 2014 with "Four". Both Bieber's "Purpose" and One Direction's "Made in the A.M." broke the record for most-streamed album in the first week of release on online streaming platform Spotify. "Purpose" set a new record with 205 million global streams while "Made in the A.M." was streamed 106 million times, both outpacing the previous record holder, The Weeknd's "Beauty Behind The Madness," which garnered 90 million global streams in September. The third most popular album was Elvis Presley's "If I Can Dream," produced nearly 40 years after his death. This collection of Elvis classics featuring orchestral reworkings by the Royal Philharmonic Orchestra had been number one for two weeks running. Jeff Lynne's ELO was fourth with new entry "Alone In The Universe". The group's other album "All Over The World – The Very Best Of" re-entered at number 28. Fifth place was taken by Little Mix’s "Get Weird", slipping down from last week's second place. –Reuters