Kartarpur corridor talks’ next round to be held at Wagah on April 2: FO spokesperson

ISLAMABAD (92 News) – An 18-member Pakistan delegation, which reached India to hold talks on the Kartarpur Corridor project at Attari Complex in India on Thursday morning, returned home. After reaching Wagah, Foreign Office Spokesperson Dr Mohammed Faisal said that the talks were held in a pleasant mood. "The next round of talks on the Kartarpur corridor will be held at Wagah on April 2," he announced. 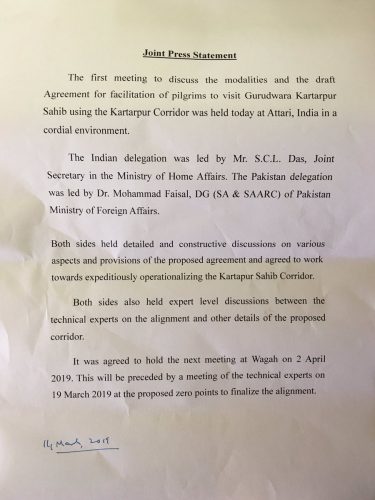 Reading out the points of the joint declaration, the FO spokesperson said that technical experts of both countries will meet at Zero Point on March 19. 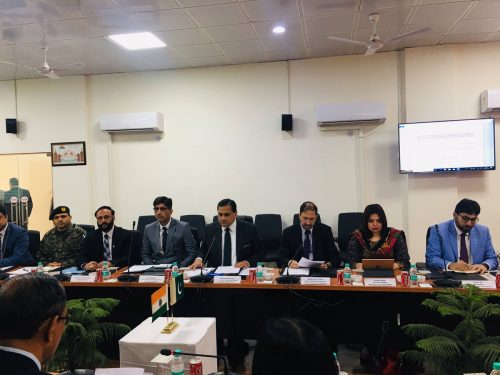 He said that there were differences on some issues. “I cannot give the details of the differences,” he added. 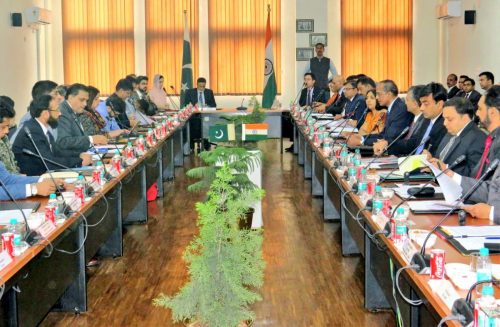 Earlier before leaving for India, Foreign Office Spokesperson Dr Mohammed Faisal said that they are leaving for Atari, India to hold talks on the Kartarpur corridor. “We want to plant a tree whose shade should spread to our neighbor’s house. The dialogues reflect the vision of Prime Minister Imran Khan,” he said. https://twitter.com/DrMFaisal/status/1106052959312465920   He said that an end to Pak-India tension is very important for the region. The FO spokesperson said that the meeting is being held on the direction of Prime Minister Imran Khan and Chief of Army Staff General Qamar Javed Bajwa. “Baba Guru Nanak Dev Jee had spent last 18 years of his life here. The shrine of Baba Guru Nanank is very important for the Sikh community,” he said. https://www.youtube.com/watch?v=U0F8leSFaY8   He said that their meeting is aimed at opening the Kartarpur corridor. “We are going to India with a positive message for dialogues. Current situation will also be discussed,” he said. Meanwhile, Pakistan Deputy High Commissioner Haider Shah has reached Amritsar. A Pakistani delegation led by Director General South Asia and SAARC Dr Mohammad Faisal is visiting India via Wahga. Other members of the delegation comprise officials from ministries of Foreign Affairs, Interior, Law and Justice and Religious Affairs. A session of technical experts of Pakistan and India will also be held at Attari simultaneously. Technical experts will discuss the issues relating to corridor, its construction, road, and other technicalities. On the other hand, the Indian delegation will visit Pakistan for Kartarpur talks on 28th of this month. Pakistan has already sent the draft agreement of Kartarpur Corridor to India. The FO spokesperson said that they are going to India for taking positive message, adding that the visit of Pakistani delegation shows the peace gesture and vision of Prime Minister Imran Khan. He hoped that India would also take step forward.

WAZIRISTAN (92 News) – One Pakistani soldier martyred, while four terrorists have been killed during an Intelligence B

Soldier martyred, two others injured in firing from across Pak-Afghan Border

RAWALPINDI (92 News) – A soldier was martyred in a terrorist attack near Jhaki Post, 35km South East of Turbat, on