ISLAMABAD (92 News) – Police fired tear gas and used batons to quell thousands of anti-India protesters who turned violent on Friday after the Eid prayers in Kashmir, even as separatist leaders including Syed Ali Shah Gilani and Mirwaiz Umar Farooq were put under house arrest as a precautionary measure.

The protesters were seen waving flags of Pakistan. They chanted pro-independence slogans, hurled stones at police who tried to stop them from marching in Srinagar and at least two other places in the region.

One person was critically injured after he was hit by a tear gas shell in Sopore. Authorities tightened security and blocked all mobile and landline Internet services for two days to stop Muslim protesters from uploading pictures of animal sacrifices, especially the slaughtering of cows, which are worshipped by Hindus. 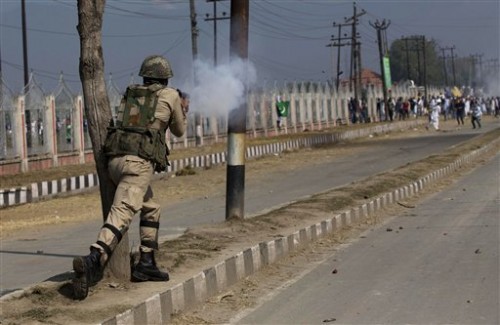