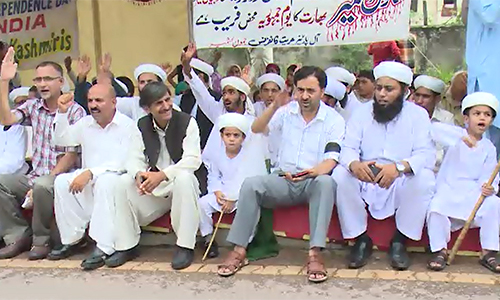 SRINAGAR (92 News) – Kashmiris observed Indian Independence Day as black day on Saturday. A complete strike was observed in Indian Held Kashmir on the call of Hurriyat leaders, including Syed Ali Geelani and Mirwaiz Umar Farooq. In Srinagar, Pakistani flags were waved in several areas despite the curfew. Hurriyat leader Hilal Ahmar was arrested on the charge of waving the Pakistani flag. All the Kashmiris leaders are under house arrest. Kashmiris presented a memorandum in the United Nations office in Islamabad. Meanwhile, demonstrations were staged in favour of Khalistan and Kashmiris in London. They chanted the slogans of ‘Kashmir Zindabad’ and ‘Khalistan Zindabad’.