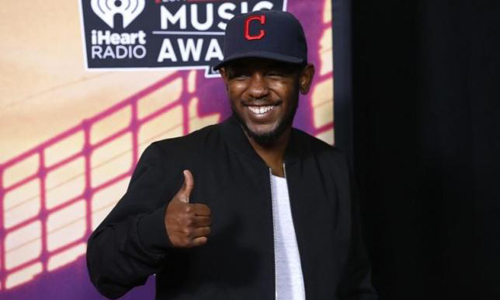 LOS ANGELES - Rapper Kendrick Lamar held onto the top spot of the weekly U.S. Billboard 200 album chart on Wednesday, in a week that saw little change among the top-selling records. Lamar's "To Pimp A Butterfly," his first chart-topping album, sold another 107,000 albums and 49,000 songs and was streamed online 17.9 million times, a cumulative sales total of 123,000 units, according to figures from Nielsen SoundScan. The Billboard 200 chart tallies album sales, song sales (10 songs equal one album), and streaming activity (1,500 streams equal one album). The soundtrack for Fox TV's hit hip-hop drama "Empire" held steady at No. 2 for the second week, selling 61,000 units, while the soundtrack to Universal Pictures' steamy film "Fifty Shades of Grey" climbed one spot to No. 3 with 54,000 units. New entries in the top 10 of the Billboard 200 chart include New York chef-turned-rapper Action Bronson at No. 7 with "Mr. Wonderful," and the 28th edition of the "Kidz Bop" album franchise at No. 10, featuring child-friendly versions of pop hits by Taylor Swift, Selena Gomez and Sam Smith. Mark Ronson and Bruno Mars' upbeat track "Uptown Funk!" held steady at No. 1 on the Digital Songs chart, selling 165,000 downloads in its 20th week on the chart. - REUTERS