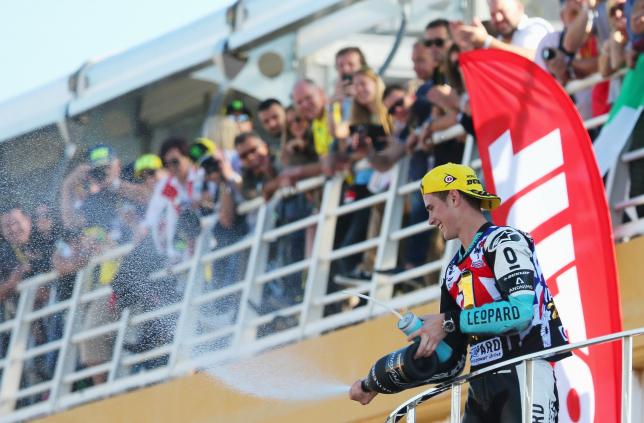 LONDON - Danny Kent won the Moto3 title on Sunday to become Britain's first motorcycle grand prix world champion since the late Barry Sheene in 1977. The 21-year-old, who had needed to finish 14th in the Valencia finale to be sure of the title but started only 18th, crossed the line in ninth place with championship rival Miguel Oliveira of Portugal winning. The result meant Kent, who was led home by Japanese team mate Hiroki Ono after playing it safe throughout the race, took the title by six points. "It's an amazing feeling," said the Leopard Racing rider, who had looked like wrapping up the title with several races to spare but then struggled as Oliveira hit a remarkable run of form and his own performances dipped. "The last four races we've gone into the race with it in the back of our mind that we could be world champion and the emotions were high. And finally after the fourth race we were able to do it," he told BT Sport television. "I think I'll go and have a little cry and let all the emotions out." Sheene, who died in 2003, won his second and last 500cc world championship with Suzuki 38 years ago. British riders have, however, won the World Superbike championship since then -- notably four times champion Carl Fogarty between 1994 and 1999. Kent won five races in the first half of the season and had been 70 points clear with six rounds to go before a series of setbacks took the title down to the wire. The Briton and Oliveira, who will be team mates in Moto2 next season, ended up with six wins each for the season. Oliveira, who had to win to stay in the title reckoning, had a battle until the final corner when Nico Antonelli fell and took out Romano Fenati and Efren Vazquez who had been challenging for the lead. -Reuters