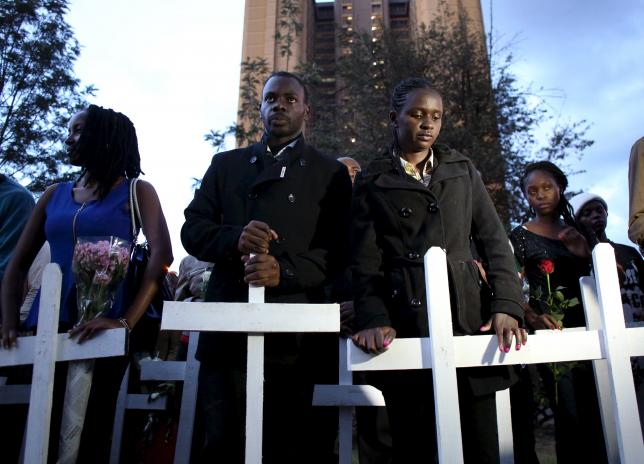 NAIROBI - Kenyan university students marched in the capital on Tuesday to demand more security from the government after gunmen killed nearly 150 people at a campus in the eastern town of Garissa last week. A citizens group held a vigil in Nairobi's main park later in the evening, grieving for those killed in the attack claimed by al Shabaab Islamists based in neighbouring Somalia. Gunmen from the al Qaeda-aligned group killed 148 people on Thursday when they stormed the Garissa University College campus, some 200 km (120 miles) from the Somali border. On Tuesday, hundreds of students from different universities walked through the streets in the city singing and shouting, and some headed to the office of the president where they presented a petition. "Enough is enough. The government must tackle the issue of insecurity seriously," said John Derrick, a student at the Technical University of Kenya. Government officials were not immediately available to comment. During the vigil held at the city's Uhuru Park, hundreds of people lit candles and placed roses in a corner where dozens of white crosses were planted and adorned with Kenyan flags. Njoki Kamau, a mother of four with a girl in college and a boy in high school, said the attack in Garissa had left her feeling even more vulnerable. "This thing has hit us really hard," said the school administrator, before laying a rose among the crosses. "As a Kenyan, I don’t feel safe anymore," she said, adding she had put the safety of her school-going children in God's hands. Six suspects were taken to court on Tuesday in connection with Thursday's attack in Garissa, the national prosecutor's office said. Prosecutors said the chief magistrate granted them 30 days to complete investigations against the suspects while holding them in police custody. Al Shabaab has killed more than 400 people on Kenyan soil in the last two years, including 67 during a siege at Nairobi's Westgate mall in 2013, piling political pressure on President Uhuru Kenyatta that intensified with last week's killings. Kenya has struggled to stop the flow of militants and weapons across its porous 700-km (435-mile) border with Somalia, and the violence has also damaged the economy by scaring away tourists and investors. - Reuters