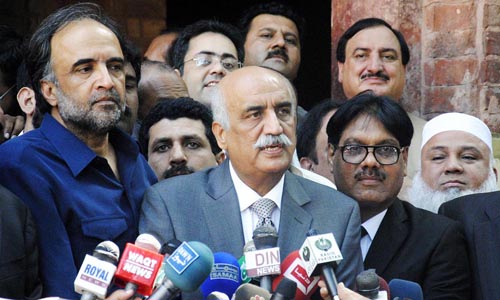 ISLAMABAD (92 News) – Leader of Opposition in National Assembly Khurshid Shah on Thursday condemned the FATA ordinance and appealed to the chief election commissioner (CEC) to take notice. While talking to media outside the Parliament, Shah said that rules cannot be changed after the election schedule is announced. Thus, the ordinance shall be considered unlawful, he said. “The government has set an example of horse-trading by introducing the ordinance overnight,” Shah said, while accusing the government of bringing an ordinance which suited only the ruling party. The opposition leader also lamented the fact that the prime minister is not present in the country on the eve of Senate election.