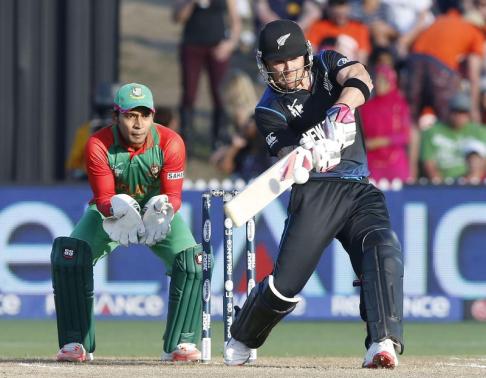 HAMILTON - New Zealand completed an unbeaten run in the cricket World Cup group stages on Friday by defeating Bangladesh by three wickets at Seddon Park. A third-wicket partnership of 131 between Martin Guptil and Ross Taylor rescued the New Zealanders after their leading batsmen Brendon McCullum (8) and Kane Williamson (1) had departed in the space of an over while chasing 289 to win their sixth consecutive tournament match. Grant Elliott and Corey Anderson both scored 39 with a flurry of strokes and Tim Southee struck a huge six followed by a four to give his team victory with seven balls to spare. Both teams had already qualified for the quarter finals. Guptil, who was struck by cramp in his left leg on 99, scored his first World Cup hundred and his team's first of the tournament before he was caught for 105 from 100 balls. Taylor compiled 56 after struggling for runs in the earlier games. Bangladesh, on a roll after defeating England on Monday, became the first team to bat through their 50 overs against the co-hosts, reaching 288 for seven with Mahmudullah scoring an unbeaten 128. Mahmudullah, who scored Bangladesh's first World Cup hundred against England, was granted a huge slice of luck on one when an edge off Tim Southee went through Corey Anderson's hands at first slip. Thereafter he batted with a sensible mix of caution and aggression, taking advantage of McCullum's aggressive field placings and marshalling the lower order skilfully. New Zealand made their first team change of the tournament when Mitchell McClenaghan came in for the injured Adam Milne. McCullum then won a rare toss and asked Bangladesh to bat on a hot, steamy afternoon after steady rain fell for much of Thursday. Southee and Trent Boult swung the ball late and only four runs came off the first five overs as the batsmen played and missed. Boult then struck, bowling Imrul Kayes for two with a magnificent delivery which moved away late from the right hander and capturing the wicket of Tamim Iqbal (13), caught by Anderson. Then came Anderson's costly drop and enterprising batting by Mahmudullah and Soumya Sarkar (51), who scored his maiden one-day international half-century. Daniel Vettori bowled yet another subtle, probing spell of flighted left-arm spin, conceding only 42 runs and picking up a wicket while Anderson was also economical and was rewarded with two wickets when Shakib Al Hasan (23) and Mushfiqur Raham (15) edged catches to wicketkeeper Luke Ronchi. New Zealand appeared to have the game under control at that stage but runs came freely off McClenaghan, who was unable to extract any bounce from the pitch. Sabbir Rahman (40) cracked two sixes and five fours and Mahmudullah paced his innings admirably to reach his century off 111 balls after a subdued start. Al Hasan, captaining Bangladesh in the absence of Mashrafe Mortaza, who has been battling injury and a sore throat, then opened the bowling with his slow left-arm spin. He dismissed McCullum caught at long-off while Williamson sliced a delivery to cover. –Reuters [caption id="attachment_8415" align="alignnone" width="500"]