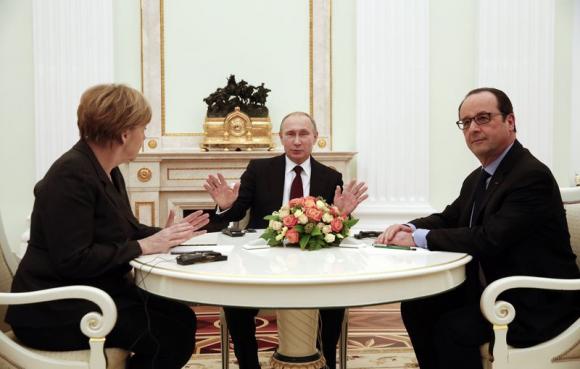 (Reuters) - The leaders of France and Germany flew out of Moscow in the dead of night after five hours of talks with Vladimir Putin on Friday, with little to announce to end fighting in Ukraine beyond a promise to keep talking. None of the leaders spoke publicly after the meeting, which ended around midnight with President Francois Hollande and Chancellor Angela Merkel whisked straight from the Kremlin back to the airport. The French and German leaders had held similar late talks the night before with Ukrainian President Petro Poroshenko, part of a last-ditch push for a breakthrough before EU leaders consider new financial sanctions against Russia next week. European officials had played down expectations ahead of the Moscow talks, expressing doubt that Putin would compromise while pro-Russian rebels are advancing on the ground. Afterwards, Moscow and Berlin both described a commitment to work on a "possible joint document" on restoring a collapsed peace deal signed last September in Minsk, Belarus. The document would include ideas proposed by the leaders of France, Germany, Russia and Ukraine, who would all speak in a conference call on Sunday. But there was no public word of any agreement on the crucial issue of whether rebels would withdraw from territory they have seized since last year's truce collapsed. In a sign of the tense atmosphere, the French and German leaders had gone straight into the Kremlin for the talks without the usual diplomatic niceties of a welcoming handshake for the cameras. They emerged only for a stiff photo opportunity. On the ground, a brief truce was organized on Friday so trapped civilians could reach safety from Debaltseve, a government-held railway hub nearly encircled by rebel forces who have made it the target of their advance. Both sides sent convoys of buses, giving residents a choice to evacuate to government or rebel territory. The government buses left full; the rebel buses left mostly empty. "The last two weeks were hell," said Artem Nikishin, 31, boarding a bus to the government-held town of Slaviansk with his wife and two sons. "This is our property now," he said, pointing to several bags and a parcel wrapped in a blanket. U.S. ARMS The West accuses Russia of backing an advance in recent weeks by rebels fighting for territory Putin has called "New Russia", which scuppered the ceasefire agreed last September, reviving a conflict that has killed more than 5,000 people. Moscow denies it is involved. This week, Washington has begun openly hinting it could arm Ukraine's military. That has exposed a potential rift with its main European allies, which argue the move would backfire, by escalating the conflict without giving Ukraine the means to win. U.S. General Philip Breedlove, the top military commander in NATO, implied that he favored sending weapons, telling a security conference in Munich that the West should use "all the tools in the toolbag". But German Defense Minister Ursula von der Leyen told the same conference: "Are we sure that we would be improving the situation for the people in Ukraine by delivering weapons? Are we really sure that Ukraine can win against the Russian military machine?" Western countries accuse Putin of sending funds, heavy weapons and troops to back pro-Russian separatists who launched an offensive in January, when a five-month-old truce finally collapsed. Moscow denies assisting the rebels. Since launching their offensive, the rebels have made major advances and acted in response to heavy shelling by Ukrainian government forces. Kiev and its Western allies want any new ceasefire to require the rebels to give up those new gains. A statement on Poroshenko's website after Thursday night's talks in Kiev said the sides had expressed the hope that Russia had an interest in a peaceful solution. Ukrainian Prime Minister Arseny Yatseniuk in Kiev made an undisguised pitch for military help. "Peace in Europe depends on peace in Ukraine and for us to achieve that peace Ukraine must have the means to defend itself. Not in offensive operations, but in defense operations," he said. Ukraine wants "lethal" aid such as anti-tank weapons to help it fight the heavy battle tanks it says the rebels have received from Moscow, as well as "non-lethal" equipment like night vision goggles and radar to detect where artillery is fired from. Reuters journalists who reached the besieged government garrison of Debaltseve with the humanitarian convoys on Friday saw buildings shattered and walls blasted open with shells. Even as the evacuation was taking place, the town's Ukrainian army defenders kept up regular howitzer and mortar fire at separatists beyond the town's perimeter. In the center, dozens of Ukrainian troops in full battle gear mingled with civilians waiting either to receive humanitarian aid or board the buses out. A soldier who only used his nickname of "the student" said they were determined to hold Debaltseve. "We will win this battle. We do not need American weapons... what we need is our fighting spirit. As long as we have it, we will defeat these Russian servants in Donetsk and Putin himself."