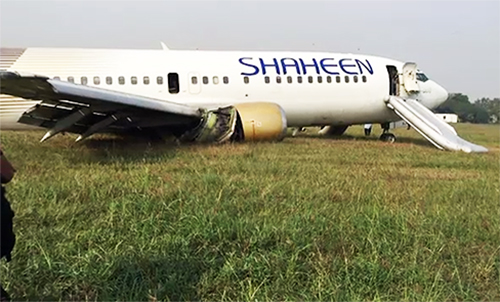 KARACHI (92 News) – Punjab Police have on Sunday detained the pilot of Shaheen Airline’s plane which crash-landed in Lahore Asmat Mahmood during a raid conducted in Karachi’s Khyaban-e-Rahat area and shifted him to Lahore. According to the family of the pilot, the Punjab police personnel entered in their house and tortured the private airline’s pilot. The family said that Darakshan Station Police denied having any knowledge of the incident. However, the pilot’s family has alleged he was taken away by policemen in plain clothes who manhandled him. Meanwhile, the investigation team member Captain Mumtaz said that Capt Asmat possess a good character, adding that he is being accused to save the Airline. He said that the investigation of Shaheen Airline accident is being conducted in its office and the third party should be involved to carry out fair investigation. It is pertinent here to mention that police have registered a case against Shaheen Airline’s pilot Asmat Mahmood on the directions of Director General Civil Aviation Authority.