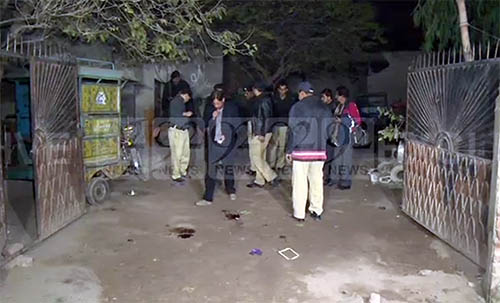 LAHORE (92 News) – At least four terrorists were killed, while three police officers injured during an encounter in Lahore’s Badami Bagh area in the wee hours of Thursday. As per details, on a tip off the arrested terrorist Haroon Bhatti regarding the presence of terrorists, police conducted a raid at a warehouse in Badami Bagh area. During the raid, the terrorists hiding in the area opened firing killing Haroon Bhatti on the spot while injuring three cops, in retaliation police killed all the three terrorists. The terrorists were identified as Umair Nadeem, Umer Hassan and Nouman, who belonged to a banned outfit. Police further recovered arms and ammunition including ten hand grenades, two SMGs, six magazines, ten IEDs and five remote controls. According to police, the terrorists were involved in different incidents of murder, attempt to murder and kidnapping, while they were also wanted in targeting police officers. Police said the terrorists were involved in the targeted killings of Dr Azeem and Ghulam Raza. They were also wanted in the murder case of Maulana Shamsur Rehman.