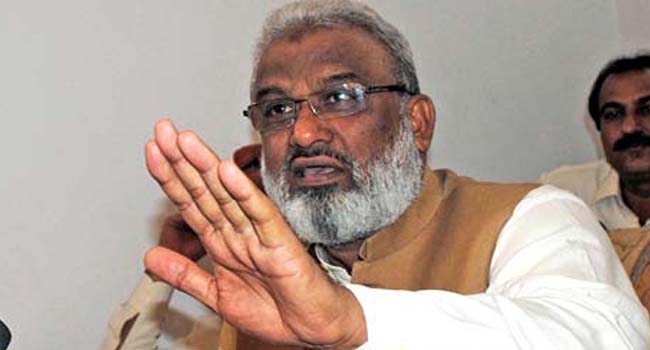 ISLAMABAD (92 News) – Sindh Opposition Muhaz (SOM) chief and former chief minister Sindh Arbab Ghulam Rahim has on Thursday said that the provincial government is using state resources in the local government polls and he has handed over evidence of pre-poll rigging and violation of code of conduct to the Election Commission. A four-member delegation including Senator Muzzafar Shah, Ramesh Kumar and Ghous Baksh and headed by Arbab Ghulam Rahim met with the Chief Election Commissioner (CEC) Sardar Raza Khan and other members. Talking to media after meeting, the SOM chief said that they demanded the Election Commission of Pakistan (ECP) to restore 2013 polling stations. Arbab Ghulam Rahim said that they cannot expect anything good from the Sindh government, adding that the polling staff is biased and bloodshed is feared if army is not deployed in Sindh during the LG Polls. He said that the Returning Officers (ROs) are carrying out rallies in support of Pakistan People’s Party (PPP), adding that if election would be conducted transparent, the PPP will lose its mandate.