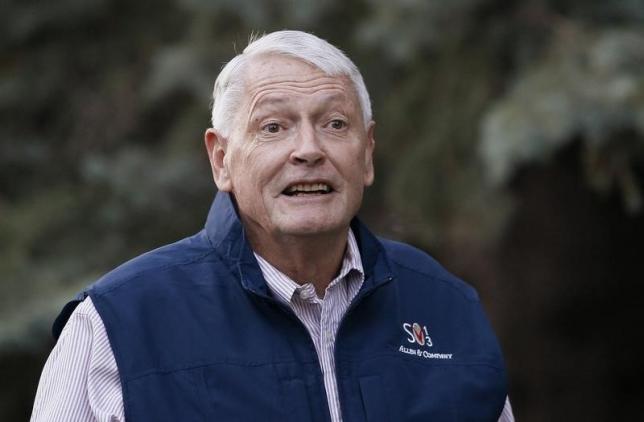 SUN VALLEY - Liberty Interactive Corp (QVCA.O), which owns home shopping network QVC, said it would acquire Zulily Inc (ZU.O) in a deal valued at $2.4 billion to tap into the online retailer's younger clientele and its strong mobile presence. Zulily is known for its "flash" sales of clothing, primarily for women and children. Chinese e-commerce giant Alibaba Group Holding Ltd (BABA.N) owns a stake of about 9 percent in the company. Billionaire John Malone-backed Liberty will combine the five-year old Zulily with its QVC business, which is about 30 years old and seen by analysts as a maturing business in the United States. Together, the companies will have annual revenue of about $10 billion. QVC has been expanding its digital presence - 40 percent of its revenue comes from e-commerce. The deal will help the TV shopping network bolster its online business and attract young shoppers who are more comfortable making purchases online and on mobile devices. Liberty offered $18.75 per share - $9.375 in cash and 0.3098 newly issued Liberty stock - representing a premium of about 49 percent to Zulily's Friday close. Zulily shares jumped to $18.73 in early trading on Monday, while Liberty was down 1.6 percent. Zulily has been struggling to boost growth in the face of increasing competition from other flash sales sites such as Boston-based Rue La La and giants such as Amazon.com Inc (AMZN.O). "There is some work to do to get Zulily back on track in growth terms," Neil Saunders, chief executive of research firm Conlumino said. "QVC will need to oversee that work if it's to get its investment to pay off." Saunders, however, said QVC was well run. "Behind the scenes it is younger and more savvy than it looks." Liberty will also benefit from the relative lack of overlap between QVC and Zulily. "Only 6 percent of Zulily's active customers made a purchase on QVC," QVC Chief Executive Mike George said on a conference call. Once the deal closes, expected in the fourth quarter, Zulily will remain based in Seattle and continue to be run by Chief Executive Darrell Cavens. Baker Botts LLP is Liberty Interactive's legal adviser. Goldman Sachs is the financial adviser to Zulily and Weil, Gotshal & Manges LLP and Cooley LLP are its legal advisers. Up to Friday's close, Zulily's stock had fallen about 43 percent since its debut in 2013. -Reuters