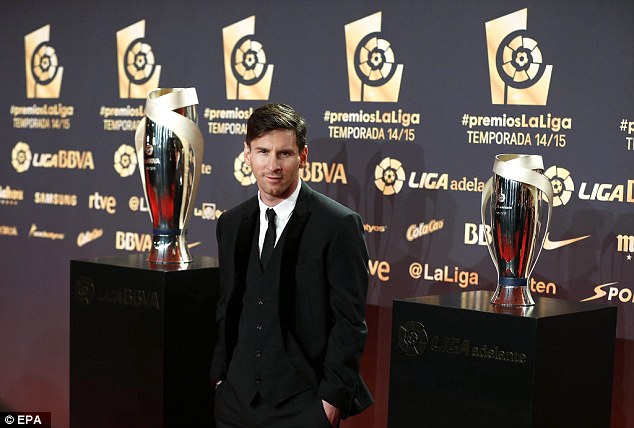 BARCELONA (92 News) – Lionel Messi has again been crowned the Spanish La Liga's best player for 2014-15 at the gala LFP Awards ceremony in Barcelona.

It was the sixth time in the awards' seven-year history that Messi has claimed the top prize, with last year's winner Cristiano Ronaldo the only other recipient last year.

The Argentina maestro claimed the award along with being chosen as forward of the year on a night which saw his treble-winning Barca side rewarded for their dominance of the league and Europe.

With a final count of five awards for Barcelona and three for Real Madrid, who were recently beaten 4-0 by their fierce rivals, Ballon d'Or finalist Neymar suggested the tally should have been more lop-sided.

'Barça five awards, Madrid three? Don't know if it's fair, but all nominees worked hard,' he said after being dubbed America's best player despite Messi, Bravo and Rodriquez all hailing from South America. 'Barca could have won more but I'm happy with my award.'

Real's awards came to Sergio Ramos, winning the defender prize for the fourth year in a row, and James Rodriguez chosen as the best defender.