KINGSTOWN (92 News) – A blazing half-century from opener Liton Das helped Bangladesh put up 184/5, and the Windies managed just 135/7 in 17.1 overs in reply before rain washed their hopes away.

Bangladesh added the Twenty20 International series trophy to the one they had won for winning the one-day internationals, clinching the deciding T20I in Lauderhill in Florida on Sunday, 5 August, by 19 runs (DLS method).

Bangladesh’s win was set up by Das, the opener smashing a 32-ball 61 with six fours and three sixes to take them to a formidable 184/5. The Windies chase was always behind, and even though Andre Russell gave them hope with a 21-ball 47, it wasn’t enough to keep them above the par score when rain forced the game to be called off after 17.1 overs – the Windies were 135/7 at that stage, 19 runs short.

It was a blazing start for Bangladesh after they chose to bat, with Das taking centre stage early on. A swept boundary off Samuel Badree in the first over was followed by 6, 6 and 4 in the second off Ashley Nurse as Das raced away.

Tamim Iqbal, Das’ opening partner, was slower only in comparison, and got going with a four and a six in the third over of the innings, bowled by Badree, and sent Russell for another four to get Bangladesh past 50 in just 3.4 overs – the quickest they have reached the mark in T20Is.

Iqbal fell for a 13-ball 21, holing out to Kesrick Williams off Carlos Brathwaite in the fifth over, but Das continued to go big, Soumya Sarkar’s quick dismissal not a deterrent – Bangladesh touched 71/2 at the end of the Powerplay, and Das got his first half-century in limited-overs cricket shortly after, off just 24 balls. 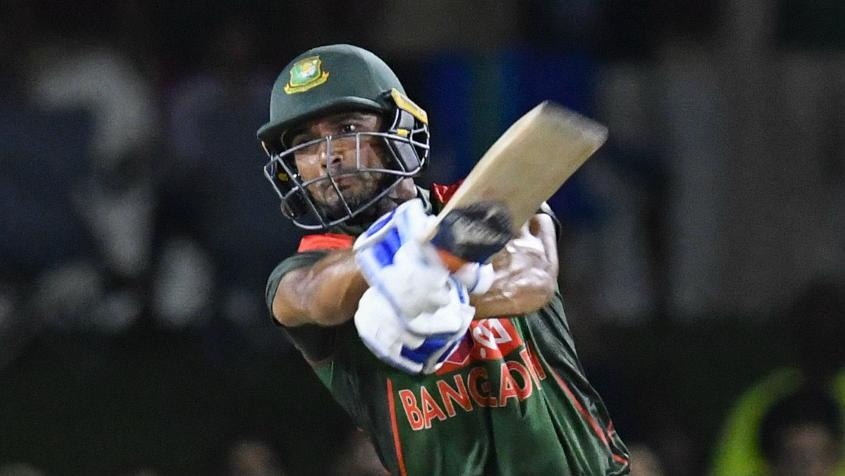 There was a phase in overs 10-11 as Mushfiqur Rahim first and then Das were dismissed and Shakib Al Hasan and Mahmudullah took a little time to settle down, giving the impression that the Windies were clawing back into the contest.

But a rain break after 16.3 overs, with Bangladesh on 149/5, led to a bit of a change in the flow as Mahmudullah hit three boundaries – including one with a Natmeg – to take Bangladesh to the biggest total of the series. 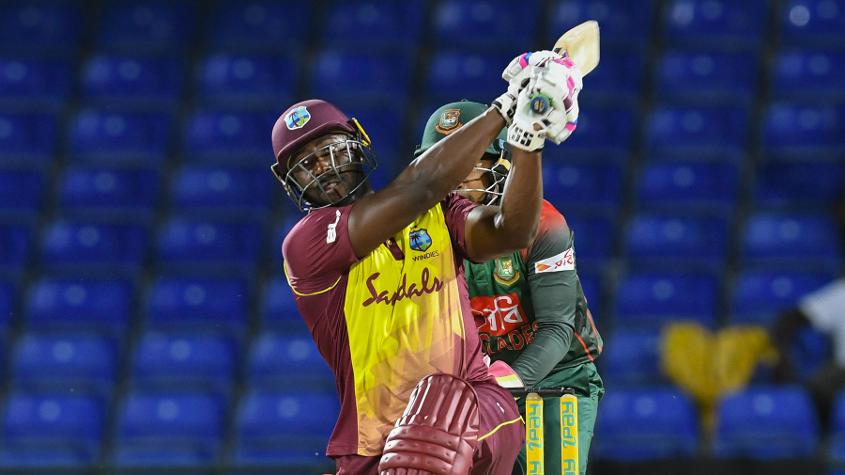 It was always going to be a daunting chase for the Windies to pull off, and it seemed to go away from them early on as they were reduced to 32/3 after the Powerplay and reached the halfway mark on a precarious 61/3.

But Russell was still very much there, and showing every sign of single-handedly turning the game. Denesh Ramdin fell for an 18-ball 21 and Rovman Powell for a 20-ball 23, but Russell, in the little time between the two dismissals, sent Shakib Al Hasan for two sixes, and then took Mustafizur Rahman for a six and a four soon after. 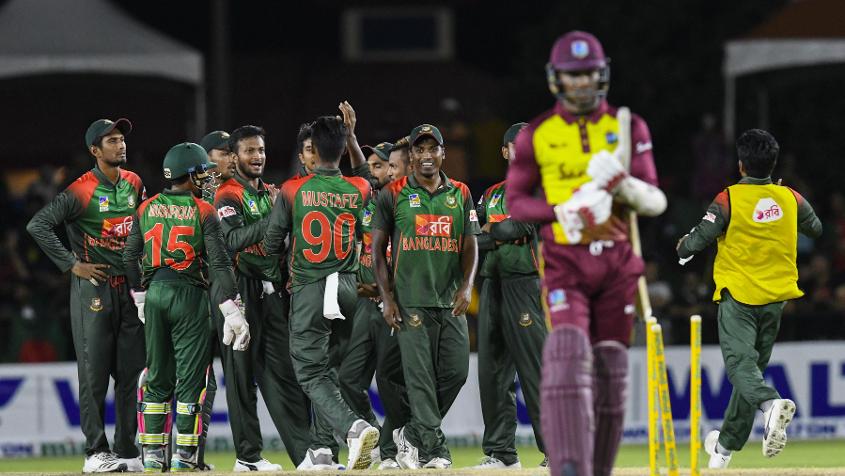 Unfortunately for Bangladesh, Nazmul Islam, who did so well in returning 3/28 in the second game, had to go off the field after a freak injury – he dived to stop a ball off his own bowling and Chadwick Walton stepped on his hand accidentally – and that depleted their attack, not ideal when Russell is in his all-conquering avatar.

A couple of quiet overs, by Shakib and Rubel Hossain, however, brought the scales back in the favour of the visitors, leaving the Windies to get 64 runs from four overs.

Russell was up for it, but he needed support, which Brathwaite couldn’t provide with an innings of five in 10 balls. Russell had to go it alone – he tried, with two sixes in one Abu Hider over, but with Rahman sending in a low full toss that Russell could only hammer to Ariful Haque at long-on, it was the end of Windies hopes.

Another spell of rain, which forced the match to be called off, finished off the world champions.