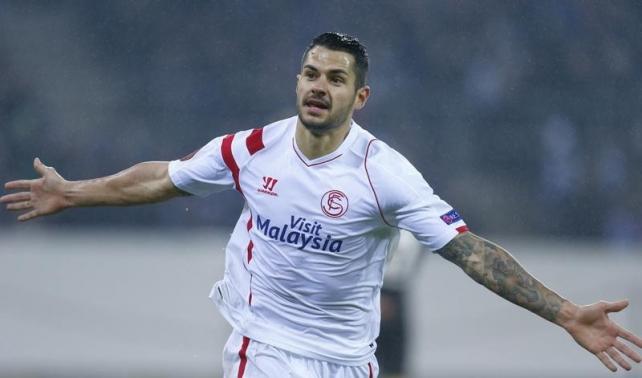 LONDON (Reuters) - Liverpool's Europa League campaign ended at the scene of one of their greatest European triumphs as they lost 5-4 on penalties to Besiktas in the Ataturk Stadium on Thursday on a woeful night for British clubs. Brendan Rodgers's side were the highest profile casualties of the last 32, where holders Sevilla came through a testing encounter at Borussia Moenchengladbach, winning 3-2 on the night and 4-2 on aggregate. But in a sign that Italian teams may not be the dying force in Europe they are sometimes made out to be, AS Roma were joined in the last 16 by compatriots Inter Milan, Fiorentina, Torino and Napoli. Roma overcame crowd trouble and the temporary suspension of their match in Feyenoord to win 2-1 in a fiery atmosphere in Rotterdam and clinch a 3-2 success over the two legs. The only British representatives in the last 16, however, will be Everton, who saw off Young Boys 7-2 on aggregate, after Premier League Tottenham Hotspur were beaten 2-0 at Fiorentina and Celtic had their hopes ended in a 1-0 defeat by Inter. Turkish side Besiktas won their clash with Liverpool after Dejan Lovren missed the decisive penalty after the match ended 1-1 on aggregate following Besiktas's 1-0 win on the night. Croatia centre back Lovren blasted his effort high and wide to spark wild celebrations at the ground where Liverpool beat AC Milan on penalties 10 years ago to clinch a fifth European Cup. ATTACKING LINEUP The Merseysiders were playing at the Ataturk Stadium for the second time since their stunning 2005 comeback victory against Milan but, with club captain Steven Gerrard injured, had no surviving members of that side on the field against Besiktas. They picked an attacking lineup but were second best most of the night and Tolgay Arslan's crisp, curling effort after 72 minutes from the edge of the area levelled the aggregate score and took the game into extra time and eventually penalties. The first nine of both team's spot kicks found their target, but Lovren stepped up, leant back and sent his effort high over the bar sparking raucous home celebrations. The statuesque Croat was perhaps an odd choice to take a penalty, but boss Rodgers defended the decision. "We were happy with the penalty takers and Dejan was confident. We're obviously disappointed for him, because I felt in the game he played very well." PLASTIC BANANA Roma's passage into the last 16 was fraught after French referee Clement Turpin took the players off for more than 10 minutes after the home fans threw objects onto the pitch, including a giant plastic banana. After Adem Ljajic gave Roma the lead and Elvis Manu had levelled for Feyenoord, who had Mitchell Te Vrede sent off which sparked the trouble, Gervinho netted the winner when he converted Vasilis Torosidis's cross from he right. Three-times winners Sevilla were twice pegged back by their German hosts, who had goalscorer Granit Xhaka sent off, before Vitolo rounded off a counter attack in the 79th minute with his second goal to complete the victory. Inter edged Scottish champions Celtic 1-0 to go through 4-3 on aggregate after a high-scoring first leg was followed by a cagey return in Italy where Fredy Guarin got an 88th minute winner. Inter's Serie A rivals Fiorentina beat Tottenham Hotspur 3-1 on aggregate with German striker Mario Gomez and on loan Chelsea player Mohamed Salah scoring in the second half. Two goals from Jose Rondon helped Zenit St Petersburg ease past PSV Eindhoven 3-0 in their second leg in Russia to complete a 4-0 aggregate success. Ajax Amsterdam, Villarreal, Dinamo Moscow, Dynamo Kiev, VfL Wolfsburg, Club Brugge and Dnipro Dnipropetrovsk also booked spots in the last 16 of Europe's second tier competition which this season brings a Champions League spot for the winners. [caption id="attachment_5623" align="alignnone" width="500"]