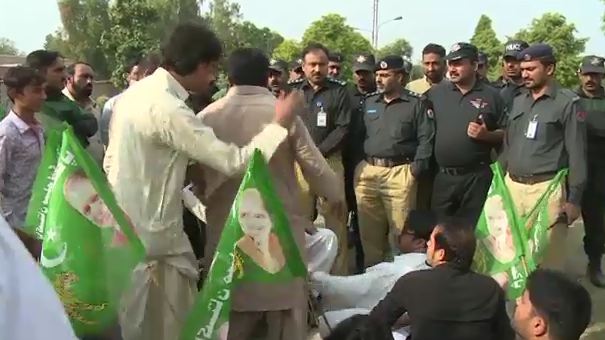 MULTAN (92 News) – The activists of Pakistan Muslim League-Nawaz (PML-N) have on Sunday held a protest demonstration in front of Circuit House against unjustified distribution of local bodies’ election tickets. As per details, the supporters of PML-N’s Rao Anees held a protest demonstration in front of Multan’s Circuit House before the arrival of Governor Punjab Rafiq Rajwana. The protesters were carrying party flags and banners depicting their demands. “The party workers are being deprived of their right in local bodies’ election,” the protesters said. On the occasion, Rao Anees said that the party leaders are distributing tickets to those who supported former president Pervez Musharraf and Pakistan People’s Party (PPP). The party activists remained outside circuit house till the end of press conference of Governor Punjab. The party workers tried to meet Rafiq Rajwana but police stopped them from meeting Governor Punjab. Rao Anees said that he would commit suicide if Prime Minister Nawaz Sharif would not do justice with him.