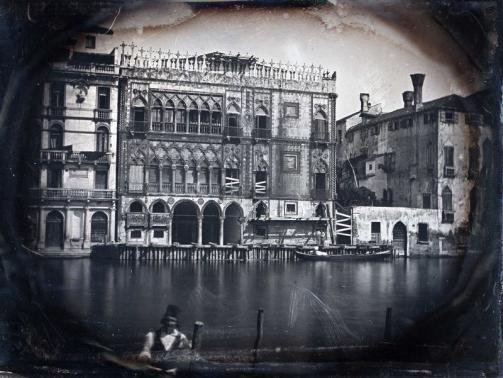 LONDON - Early daguerreotype photos of Venice that were auctioned off as an odd lot belonged to John Ruskin and provide new insight into the Victorian art critic's work, the authors of a book about the images said on Thursday. The Venice scenes, taken around 1850 and purchased at an auction in the northern English Lake District in 2006, coincide roughly with Ruskin's work on his epic three-volume treatise "The Stones of Venice" about Venetian art and architecture. They are being reproduced, along with other images taken or owned by Ruskin, in "Carrying Off the Palaces: John Ruskin's Lost Daguerreotypes", published by the rare book and manuscript dealer Bernard Quaritch. “The discovery of 188 previously unknown John Ruskin daguerreotypes has been the most exciting of our career," photographic dealer Ken Jacobson, who co-wrote the volume with his wife Jenny, said in a statement. It said the images' provenance was determined after "years of research". Perhaps the most dramatic proof is that the numbers on the reverse of some of the daguerreotypes are the same, and in Ruskin’s own hand, as those on Ruskin’s manuscript at the Ruskin Library at Lancaster University. [caption id="attachment_9731" align="alignnone" width="500"] The Ducal Palace, the Zecca and the Campanile in Venice with moored ships in the foreground are seen in this handout photograph of a daguerreotype circa 1851, released in London March 18, 2015.[/caption] The research also shows how Ruskin’s use of the photographs influenced the style of his watercolours, the publishers said. "We feel that the quality and unorthodox style of many of Ruskin’s daguerreotypes will come as a major surprise to both photographic historians and those in the field of Ruskin scholarship," Jacobson said in the statement. "Ruskin’s daguerreotypes would be a sensational new revelation in the history of photography even if he were completely unknown." The daguerreotypes, which used an early photographic process that captured images on a silvered copper plate, were sold as an essentially unidentified lot at an auction in Cumbria, near where Ruskin lived, with a starting price of 80 pounds. [caption id="attachment_9732" align="alignnone" width="500"] Saint Mark's Basilica and the Piazza in Venice are seen in this handout photograph of a daguerreotype circa 1845, released in London March 18, 2015.[/caption] A bidding war with another collector who suspected what they were rapidly bumped up the price and they ended up selling for 75,000 pounds ($110,000). Ruskin, who lived from 1819 to 1900, was the most influential art critic of his day. In addition to his groundbreaking work on Venice, he wrote an influential essay in defence of the pioneering land and waterscape painter J.M.W. Turner that helped to turn the tide of critical and public opinion in Turner's favour. - Reuters