Addressing a joint press conference on Wednesday, he said that Pakistan Prime Minister Imran Khan is the first foreigner being welcomed by him. “Pakistan and Malaysia are facing the same conditions,” he said.

Prime Minister Imran Khan said that they will benefit from the experiences of Mahathir Mohmad for economic progress in Pakistan. “Mahathir Mohmad has played a key role in the progress of the country. Pakistan and Malaysia will cooperate with each other in different sectors,” he announced.

Imran Khan said that he and his Malaysian counterpart got votes against corruption.

Welcoming Malaysian cooperation in LNG, hydro power and renewable energy, he invited the Malaysian companies to specially invest in the economic zone. 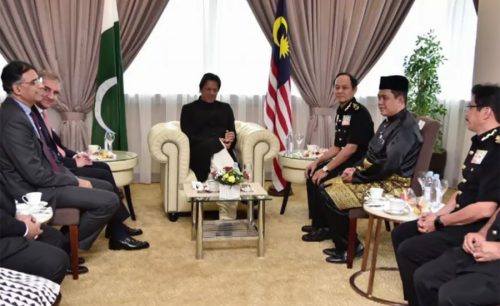 In a joint decoration, Malaysia and Pakistan stressed the need for increasing investment, economic cooperation and trade.

Both countries also agreed to continue cooperation in the sectors of tourism, education, social and economic progress in Pakistan.

Both countries also discussed the matters pertaining to the ASEAN.

They also signed an agreement to end official and diplomatic visas partially.