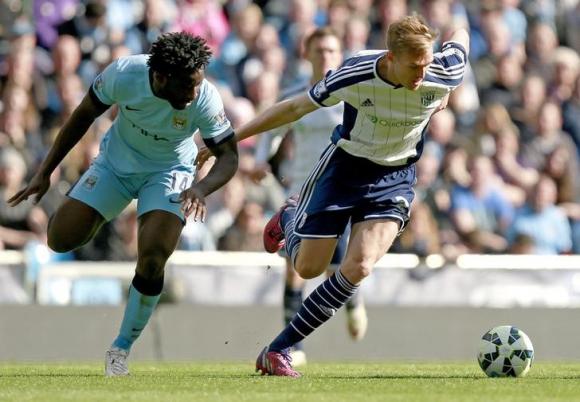 LONDON - Manchester City retained their slim title hopes thanks to a 3-0 win against 10-man West Bromwich Albion but Arsenal are hot on their heels after a 2-1 victory against Newcastle United in the Premier League on Saturday. Much-maligned after their Champions League exit in Barcelona on Wednesday and a league defeat by Burnley last week, City were helped by a bizarre refereeing decision in the second minute in which West Brom's Gareth McAuley was sent off instead of Craig Dawson in a case of mistaken identity. Wilfried Bony, who had been hauled down by Dawson only for referee Neil Swarbrick to send off McAuley, later scored his first City goal and Fernando and David Silva completed the win to mark Manuel Pellegrini's 100th game in charge of the club. Second-placed City have 61 points from 30 matches, three behind leaders Chelsea, who have a two games in hand over their title rivals and play Hull City on Sunday. Arsenal have 60. Fourth-placed Manchester United (56) are at fifth-placed Liverpool on Sunday. After a trying week for Man City, Pellegrini said it was a relief to get back on track, especially with their top-four place far from guaranteed. "We have lost the last two games in different competitions, so it was important to return to victory," Pellegrini said. "We have to play eight games more, we can win the eight games and if Chelsea don't drop points we cannot win the title." IN-FORM ARSENAL Arsenal, knocked out of the Champions League by AS Monaco on Tuesday, remain one point behind City after victory against Newcastle at St James' Park means the Gunners have now won their last six league matches. Olivier Giroud struck twice in four minutes in the first half but they had to dig deep in the second half after Moussa Sissoko pulled a goal back for Newcastle. "The last 40 minutes were difficult because our legs had gone a little bit and Newcastle played very well in the second half," manager Arsene Wenger said. "We know we have a fight first to be in the top four. We go step by step, game by game." KANE TREBLE Tottenham Hotspur striker Harry Kane celebrated his first senior England call up with a hat-trick as Spurs beat bottom side Leicester City 4-3 in a thrilling match at White Hart Lane. Kane scored twice in the opening 13 minutes to give Spurs a two-goal advantage but goals from Jamie Vardy and Wes Morgan drew the visitors level. Leicester striker David Nugent conceded a penalty that Kane converted to complete a first Premier League hat-trick and move him above Chelsea's Diego Costa with 19 goals on top of the scoring charts. Nugent set up a nervy finish with a late consolation. Sixth-placed Southampton stay above Spurs on goal difference after their 2-0 win at St Mary's against struggling Burnley who remain in the bottom three. Dutchman Dick Advocaat's first game as Sunderland manager ended in defeat as his side were beaten 1-0 at West Ham United, Diafra Sakho striking late for the Hammers. Crystal Palace came from a goal down to beat Stoke City 2-1 at the Britannia Stadium, while Aston Villa's recent resurgence came to end with a 1-0 home defeat against Swansea City. - Reuters