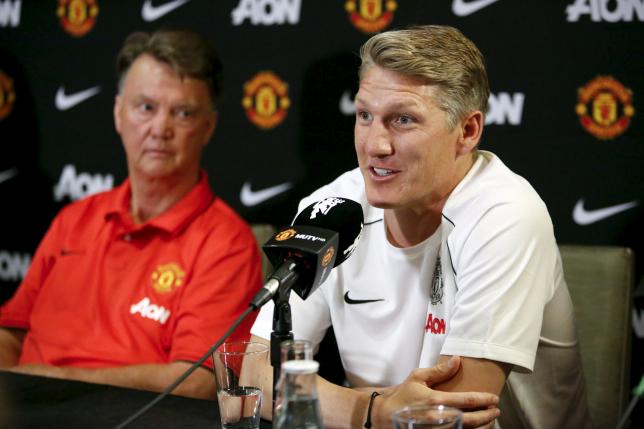 LONDON - The signing of Germany captain Bastian Schweinsteiger from Bayern Munich was a massive statement of intent by Manchester United. Not since Roy Keane swaggered round the Old Trafford pitch from 1993-2005 have United had a midfield enforcer with the skill, power and strength of character to run the team. The 31-year-old Schweinsteiger, a World Cup winner and serial trophy accumulator with Bayern, has all the attributes to emulate the charismatic Irishman. That is if United get the real Schweinsteiger, not the injury-prone model who has not started regularly for Bayern in recent seasons and may be distracted by his high-profile relationship with Serbian tennis player Ana Ivanovic. United manager Louis van Gaal has no doubt about the German after working with him at Bayern. "Bastian is, of course, no stranger to me," the Dutchman said. "I am truly delighted he is joining Manchester United. "His record speaks for itself; he has won every honour at club level and was a major part of the successful Germany World Cup-winning team last summer. "Bastian is the ultimate professional and there is no doubting his talent and his ability to control games. "He brings a wealth of experience and is an excellent addition to our squad." Schweinsteiger has taken a gamble by leaving Bayern with whom he won eight Bundesliga titles and the Champions League. "I am very happy to be here and to play for Man United," Schweinsteiger said. "It is a big honour. It's a new step in my life. I want to win titles, it's easy. Manchester United is used to that and I am too, so that's my goal." United badly need a midfield powerhouse. Michael Carrick has shouldered the burden in recent seasons but, though a highly intelligent player and cultured passer, he lacks the physicality needed to dominate Premier League matches as Keane used to do. Schweinsteiger, supported by Carrick and fellow new signing Morgan Schneiderlin, has the ability to fill that role. With Wayne Rooney freed to play as a central striker rather than helping out an overrun midfield, Van Gaal has the chance to play his best players in the right positions. If Schweinsteiger brings his A game to United they have the resources to challenge Chelsea, Manchester City and Arsenal and bring the Premier League title back to Old Trafford for the first time since 2013. If he does not, and he did little of note in the pre-season tour of the United States, Van Gaal will probably fall short in his lofty ambitions. -Reuters