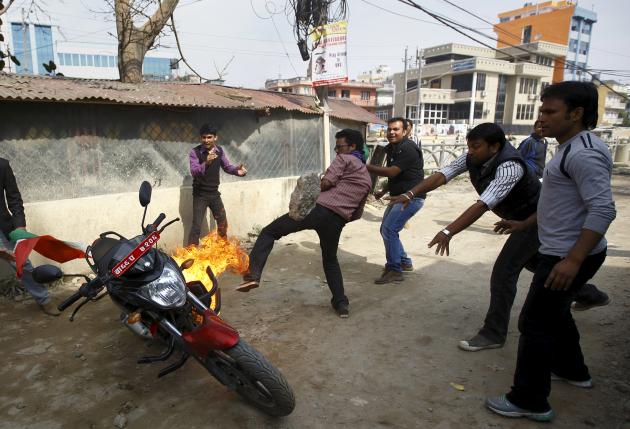 KATHMANDU - Nepalese Maoists leading a nationwide shutdown amid violent protests and clashes with police called off the strike on Tuesday as anger rose at the disruption their drive for a new constitution was causing. On the first of three days of strikes, opposition activists fanned out across Kathmandu waving red hammer-and-sickle flags to enforce the shutdown. Stone-throwing protesters damaged 17 vehicles and 50 people were detained for arson, police and officials said. The impoverished Himalayan nation between India and China emerged in 2006 from a civil war between Maoists rebels and the state and left 17,000 dead. Nepal abolished the monarchy in 2008 and the Maoists laid down their arms and embraced democracy. But the disruption to daily life angered the public and business groups, so an opposition front led by former rebels responded by cutting short the strike late on Tuesday. "We have withdrawn the strike due for Wednesday and Thursday. There were suggestions from all sides including the media that the strike should be withdrawn because it hurts the common people," Maoist leader Dinanath Sharma told Reuters. The Maoists want to split Nepal into federal states based on ethnicity, which the government rejects. The strike aimed to pressure the government to adopt the new constitution by a consensus among the main political parties. The government has said it plans to ratify the document by the parliamentary majority it enjoys. During the day, riot police fired tear gas to stop protesters from attacking cars and motorcycles that ventured onto the streets near the prime minister's office. Protesters burnt three vehicles after dousing them with petrol. Politicians have missed several deadlines to agree on the new charter for the fledgling republic and turmoil has increased in recent months. At least 11 people, including six police personnel and five activists, were injured in Tuesday's clashes, the interior ministry said. In the town of Kavre near Kathmandu, protesters detonated a cooking gas cylinder to scare the people, according to local media reports. The Federation of the Nepalese Chambers of Commerce and Industry (FNCCI) said the one-day shutdown caused losses worth $20 million and would scare away tourists and investors and deny work to thousands of daily wage earners. "I am sick of the strike," said Dipak Adhikari, a government employee who had to walk 8 km (five miles) to work. "I think it only adds people's hatred towards the organisers." - Reuters