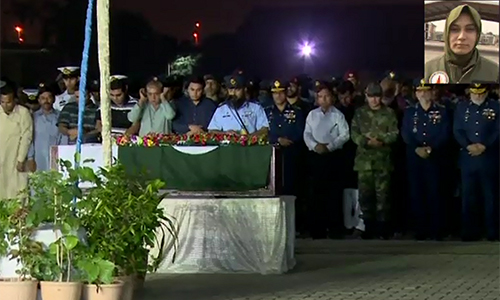 KARACHI (92 News) – The funeral for Marium Mukhtiar, a female pilot who embraced martyrdom when a trainer aircraft of the Pakistan Air Force (PAF) crashed on the outskirts of Mianwali, was offered at Faisal Airbase on Tuesday. Chief of Air Staff Air Chief Marshall Sohail Aman also attended her funeral. Prime Minister Nawaz Sharif has also expressed sorrow over her death. He said that Marium is a role model for Pakistani women. Chief of Army Staff General Raheel Sharif has expressed grief over her sad demise. He paid rich tributes to the martyred pilot, saying that she had set a new example of valor and resolve.