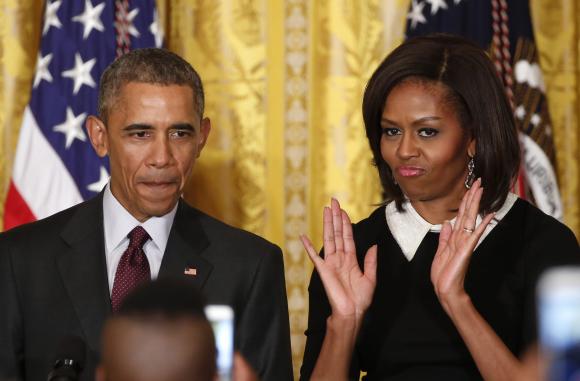 WASHINGTON (Reuters) - First Lady Michelle Obama will travel to Japan and Cambodia this month as part of a US global effort to support education for girls, the White House said on Tuesday. She will visit Tokyo and Kyoto in Japan from March 18 to March 20, and the Cambodian city of Siem Reap from March 21 to 22, it said in a statement. The initiative aims to reduce the number of girls - 62 million worldwide - who do not attend school in an effort to improve their financial stability, health and well-being, according to the administration. The effort, launched last summer through the United States Agency for International Development (USAID), will utilize the Peace Corps volunteer program to help expand access for schooling for girls, especially for teenagers. Senior Obama Adviser Valerie Jarrett on Tuesday said corps volunteers will recruit and train other local volunteers and push other community efforts in nearly a dozen countries. "The best way to economic security, the best way to pursue your dreams is if you can have an education," Jarrett told MSNBC in an interview, adding that girls who finish school are more likely to earn a decent living and improve the quality of life for them and their families. President Barack Obama and the first lady are expected to discuss the initiative at the White House later on Tuesday. Cambodia is one of 11 countries targeted by the Peace Corp initiative during the program's first year, the White House said. The other countries are: Albania, Benin, Burkina Faso, Georgia, Ghana, Moldova, Mongolia, Mozambique, Togo, and Uganda. Other countries will be added later, it added.