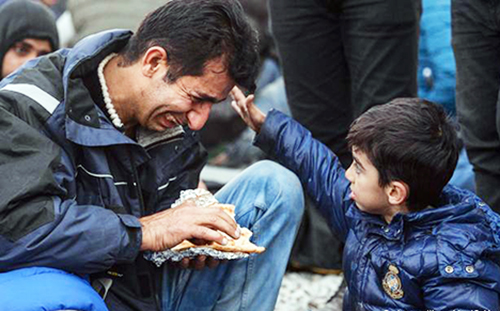 ATHENS (92 News) – As the story of migrant Pakistanis in Europe is getting extremely painful, a Pakistani family trapped in Greece-Macedonia border is yearning for food. A German newspaper ‘Bild’ claimed regarding pictures of a father-son that this is a Pakistani family. In pictures, the father is crying while holding a piece of bread while his infant son is touching the forehead of his father to make him feel better. The Macedonia is only allowing Iraqi, Afghan and Syrian immigrants to cross the border following Paris attacks that killed more than 120 people, while many Pakistani families are still trapped in Macedonia-Greece border.