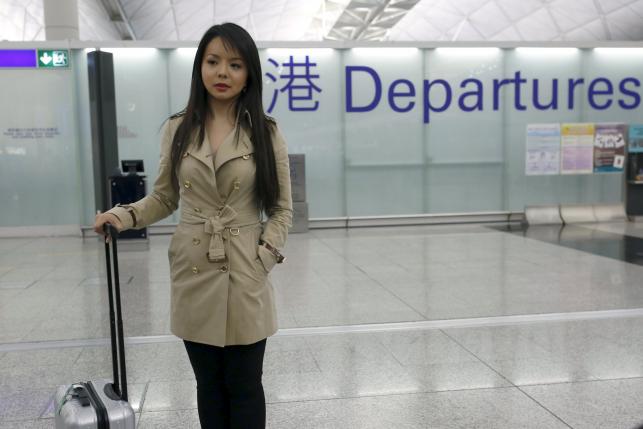 HONG KONG - Canada's China-born Miss World contestant was stopped in Hong Kong and denied permission to board a flight to the beauty pageant finals in China, a move she said was punishment for speaking out against human rights abuses in the country. Anastasia Lin, a 25-year-old Toronto actress who was crowned Miss World Canada in May, was unable to obtain a visa in advance of her arrival for the contest finals this week in Sanya, on the southern Chinese resort island of Hainan. But she said she attempted to enter the country anyway based on a rule that allows Canadian citizens to obtain a landing visa upon arrival in Sanya. Lin, who is a practitioner of Falun Gong, a religious group that says it is repressed in China, told reporters at Hong Kong's international airport that she was prevented from boarding a Dragonair flight to Sanya. She said there has been no response from the Chinese authorities so far. "There's no comment from the Chinese embassy ... so I realize that's the tactics they're using, they just want to let it die down," said Lin, who was wheeling a silver suitcase and dressed in a long brown trench coat. "It's very difficult to stand up for what you believe in," she said, adding: "I need to figure out what to do next." Lin testified at a U.S. congressional hearing on religious persecution in China in July. In her testimony, she said she wanted to "speak for those in China that are beaten, burned and electrocuted for holding to their beliefs", according to the text of her statement on the Congressional-Executive Commission on China's website. Lin said this month that her father had been harassed by Chinese officials after she spoke out about human rights abuses in the communist country. Asked about Lin's case, Chinese Foreign Ministry spokesman Hong Lei said he had "no information to provide" about her case. He did not elaborate. The Chinese Embassy in Ottawa said that Lin was not welcome in China, a Canadian newspaper reported on Wednesday. "China does not allow any persona non grata to come to China," Yundong Yang, an embassy spokesman, told the Globe and Mail. "I simply do not understand why some people pay special attention to this matter and have raised it repeatedly." Miss World pageant organizers said in an email they had no information as to why a visa was not granted to Lin, but said she may be offered a place in the 2016 Miss World contest. -Reuters