Addressing participants of a human chain formed in Islamabad to express solidarity with Kashmiris, the prime minister said that Modi has committed a grave mistake by illegally annexing Kashmir. He said such oppressive tactics will not subjugate Kashmiris’ just struggle for right to self-determination. “Their struggle will lead to their independence from Indian occupation,” he maintained.

“It is an irony that the international media is giving much coverage to the protests in Hong Kong while it is ignoring the oppression against eight million people of Jammu Kashmir,” the premier mentioned.

The prime minister also assured that the Pakistani nation will always stand by the oppressed people of occupied Kashmir.

“We will continue supporting the people of occupied Kashmir and our movement for human rights of Kashmiris will become a sea one day,” Imran Khan said. “We are repeatedly giving a message to the world that eight million Kashmiris have been under siege for over two months,” he added.

He said the world should know that the people of Kashmir have gone beyond the fear of death. There will be millions of people on roads the day curfew is lifted from occupied Kashmir. 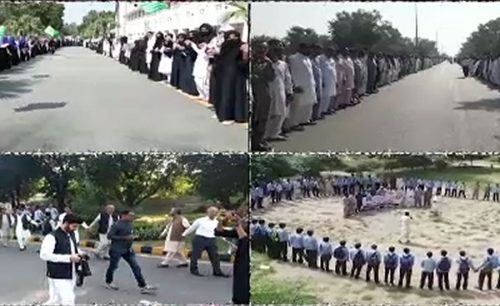 On the occasion, a large number of people belonging to different walks of life formed a human chain to express solidarity with Kashmiris. The participants chanted slogans for freedom of Kashmir from the Indian occupation.

Earlier in the day, PM Khan has said that he is puzzled as to how international media continues to give headline coverage to Hong Kong protests but ignores the dire human rights crisis in Indian Occupied Jammu and Kashmir (IOJK) – an internationally recognized disputed territory illegally annexed by India with nine million troops imposing a siege on eight million Kashmiris.

In a series of tweets on Friday, the prime minister said that for over two months with a complete blackout of communications, thousands imprisoned, including entire spectrum of political leadership plus children, and a growing humanitarian crisis.