BAGROT – For wheat farmer Noor Hussain, it was “no less than a miracle” that the lives of nearly 900 people and hundreds of cattle were saved by evacuating them from Chirah Bala village hours before a glacial lake burst its banks last May.

Hussain, 45, was busy weeding his land in the Bagrot valley when young members of a local “hazard watch group” rushed up to him and other villagers, advising them to leave quickly due to the risk of flash flooding.

They took their livestock and escaped hours before water from a huge glacial lake – nearly 1 km above Chira Bala village – swept down the mountain. No lives were lost.

Mazhar Hussain Hayat, chairman of the Dubani Development Organisation in Bagrot, said damage to infrastructure and agriculture would have been much worse had flood control measures, including small dams and retention walls, not been built in the upper areas of the village a few weeks before.

“The flood washed away a 25-year-old bridge over Bagrot River, which is fed by five glaciated peaks,” Hayat said.

He gave credit for the avoided disaster to Ashoor Ali, who leads the 10-member hazard watch group.

Standing on a mountain ridge beneath a pine tree overlooking the snow-capped, pyramid-shaped Diran peak, Ali said he and his team members went out to monitor glacial lakes once a week.

When on patrol last May, a cattle herdsman in a hamlet near Diran told them he had seen snow-melt water leaking from the banks of a lake while grazing his animals nearby.

“When we went to take stock of the state of the lake, what we noticed was shocking – a glacial lake on the verge of outburst,” Ali said.

They hurried to inform villagers of the impending danger and advised them to move to higher ground, just a few hours before the flood happened, saving the lives of humans and animals.

Locally led initiatives like this have begun to spread in recent years, with governments expected to give them formal backing in a new global action plan for disaster risk reduction due to be adopted at a March 14-18 conference in Japan.

Some 460 miles north of Pakistan’s capital, Islamabad, Bagrot comprises 10 scattered villages. Local people depend on streams that bubble forth from the Karakoram mountains in the Hindu Kush-Himalayas, the world’s most heavily glaciated area outside the polar regions.

Several dozen glacial lakes have formed a few miles up the valley, seven of which have been declared potentially dangerous by the authorities. They could burst their banks at any time, triggering flash floods in the area.

In response to the mounting threat, hazard watch groups have been set up in each village in Bagrot under a $7.6 million project launched in 2011 to address the risk of glacial lake outburst floods.

Financed by the UN Adaptation Fund and implemented by the United Nations Development Programme and the Pakistani government, the project aims to reduce the vulnerability of mountain communities to glacial lake floods.

Quoting reports from the Pakistan Meteorological Department (PMD), programme manager Khalil Ahmed said there were more than 3,000 potentially hazardous lakes in the country’s remote mountain valleys, an increase from 2,400 in 2010.

“The grim scenario of the rising number of glacial lakes, as the summer months are becoming hotter and extended, underlines the need to make mountain valleys… climate-resilient,” he said.

In Chitral, a district in northwestern Khyber Pakhtunkhwa province, hazard watch groups were rolled out in mid-2013 in the nine villages of the Bindo Gol valley, following their success in Bagrot.

Chitral has around 550 glaciers and 132 glacial lakes, more than 20 of them regarded as a threat.

Mountain farmer Mohammad Ibrahim has long lived in fear of such disasters, which have become more frequent as summer temperatures rise, accelerating melting of the glaciers surrounding the valley, which is home to 8,000 people.

But Ibrahim said local people were confident the hazard watch groups would now provide timely warnings of impending floods. “They will give us enough lead-time to scurry to safer ground,” Ibrahim said.

In Ghokir village in the Bindo Gol valley, Azizullah Chitrali heads a group of 15 young volunteers.

“I steer (them) to protect our communities and their livelihoods from any potential glacial lake flood threat or other disasters like landslides or earthquakes that could occur at any time,” he said, standing by the turquoise Chitral river.

The team monitors changes in the Bindo Gol glaciers and shares the information with a disaster risk management committee in Ghokir, made up of village elders and other trusted community members.

The deputy commissioners of Chitral and Gilgit districts say they are looking at developing plans for similar groups in other valleys. – Reuters 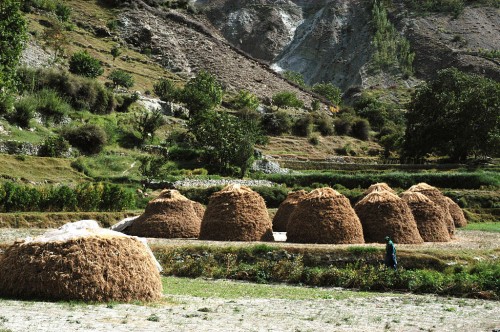