In meeting upon the Belarusian president’s arrival in Islamabad, Prime Minister Nawaz Shairf discussed bilateral relations between the two countries and means to broaden cooperation in different fields.

Nawaz Sharif said that Pakistan is keen to forge closer ties with Belarus in all fields including trade, economy, defense and culture. “We also need to encourage contacts between our parliamentarians as regular interaction among them is beneficial for creating an environment of cordiality and friendship between the two peoples,” he said. “We need to establish close interaction between the respective chambers of commerce and industry as these will boost bilateral trade and investment.” 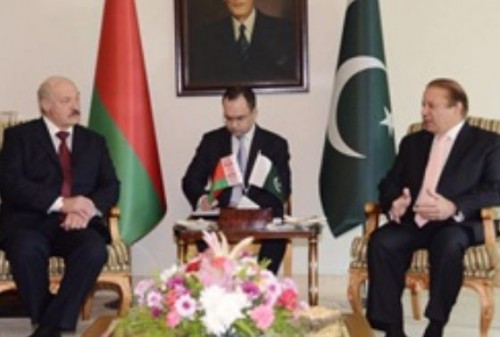 The leaders of the two countries signed a series of MoUs and agreements for cooperation in different areas such as science and technology, investment, agriculture, industries and defense production, education, media, culture and law and justice.

Earlier today, a formal welcome ceremony in honour of visiting President of Belarus Alexander Lukashenko was held at the Prime Minister House.

A smartly turned out contingent of the armed forces presented guard of honour to the visiting dignitary.

Later, Prime Minister Nawaz Sharif also hosted a luncheon in honor of the visiting Belarus President Alexander Lukashenko and members of his delegation.