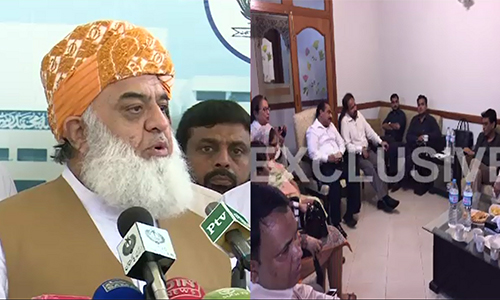 ISLAMABAD (92 News) – The MQM and JUI-F have refused to withdraw motions seeking de-seating of the PTI members. The MQM curtly refused the government delegation led by Pervaiz Rasheed in this regard. Meanwhile, the MQM and the JUI-F have formed a joint strategy to de-seat the PTI members. The MQM delegation led by MNA Abdur Rasheed Godil and Khalid Mqbool Siddiqui called on JUI-F ameer Maulana Fazlur Rahman. Speaking on the occasion, Maulana Fazlur Rahman said that the PTI members have been de-seated constitutionally. He said that the government had adopted conciliatory approach, while the motion should be dealt as per law and the constitution. Meanwhile, Maulana Fazlur Rahman talked to MQM chief Altaf Hussain on phone. Both leaders discussed political situation.