MQM takes out rally against arrest of workers in Karachi 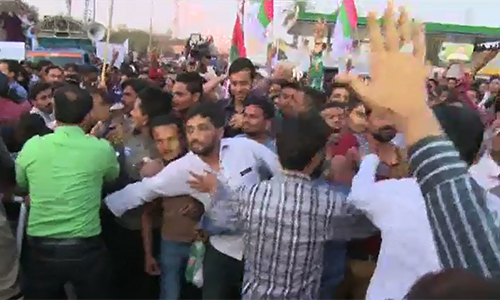 MQM takes out rally against arrest of workers in Karachi

KARACHI (92 News) – The Muttahida Qaumi Movement (MQM) took out a rally against the arrest of its workers in Karachi on Thursday. A large number of workers, including Amir Khan and Farooq Sattar, participated in the rally. The police stopped the workers from marching towards Red Zone. Later, the MQM workers staged a sit-in at Numasih Chowrangi near Mazar-e-Quaid. The situation is tense in the area. Farooq Sattar and Haider Rizvi said that the MQM would not boycott the local bodies elections. "We will achieve a big victory on December 5," they added.